Anger as ‘hundreds of trees’ on Barrow Track cut down 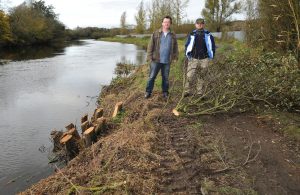 MEMBERS of the public have reacted angrily to ‘state-sponsored vandalism’ along the River Barrow. Last week, Waterways Ireland began cutting trees along the Barrow Track which, locals say, has left it ‘looking like The Somme’.

Local man Michael Whelan from Springfield Drive, who describes himself as ‘an avid walker’, claims the cut trees have been left ‘like spears’ and voiced his concerns about the effect the chopped trees will have on the local wildlife. “We condemn the young fellas who did this in John Sweeney Park,” said Mr Whelan, referring to trees which were chopped down at the entrance to the Carlow town estate recently. “Now we have a state body doing it.”

Mr Whelan said the Barrow Track by the old sugar factory site right up to Athy has been targeted, and he estimates that ‘hundreds of trees’ have been cut down. “The trees were not a hazard and they were not blocking anyone’s access,” he argued.

“There are hundreds of birds there in their natural habitat – it’s like a wildlife gem and they’ve gone in there with a bulldozer.”

He added that the work, which was contracted out by Waterways Ireland, has left “mess and carnage”. Mr Whelan’s sentiments were echoed by several other locals who contacted The Nationalist.

Responding to the claims, Waterways Ireland insisted the work was necessary and ‘essential maintenance’. It pointed out that the Barrow Track is a man-made structure which is “very susceptible to damage from trees growing along the edge of the bank”.

Responding to claims that wildlife was being harmed, it said: “Waterways Ireland follows all procedures in relation to appropriate assessment with the National Parks and Wildlife Service (NPWS). The maintenance work programme has been agreed with NPWS and ensures that valuable habitat are left intact and maintained only from the water. On the other side of the trackway, only overhanging branches posing a risk to walkers or trees causing damage to structures are removed.”

It also said that overhanging trees “can cause injury to people on boats and, to avoid them, boats veer out into the centre of the river, where they can frequently strike rocks, run too close to a weir or run aground. This is a health and safety risk which we are obliged to address”.