IRELAND has been subjected to three major famines. The first serious food shortages occurred between 1740 and ’41. This period is known as the forgotten famine. But we weren’t the only ones to suffer during those years, as the effects of a prolonged spell of extremely cold weather were felt all over Europe. It is also felt, although the issue is in dispute, that this mini-ice-age could have been responsible for wiping out or suppressing diseases such as the plague, cholera and smallpox across the continent. In Ireland, it was the sheer bitter cold that destroyed the main sources of food, causing our first serious famine. This period became known as the final serious cold spell of the little ice age. Particularly severe cold spells occurred in 1650, 1770 and 1850 – the latter being part of the tail end of the Great Famine. 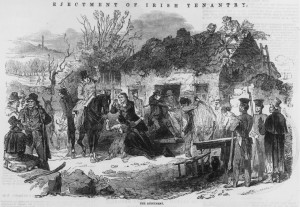 When we hear about climate change today, we should reflect on the past and realise that what happened then and what is happening now have a lot in common. And this famine period we are recalling should provide a stark reminder of nature’s awesome power. The Icelandic volcano eruption in 2010 and the disruption it caused was not dissimilar to what occurred in 1740-41.

The story begins in 1739 when a volcano on the Kamchatca peninsula in Russia erupted, pumping millions of tonnes of smoke, ash and dust into the atmosphere. In Japan, both MountTarumae and MountAsahi did likewise. The previous three decades had experienced pretty normal weather conditions and the population at that time would not have been aware of these eruptions or the effects they would have on climate change or what was in store between December 1739 and September 1741. So let’s look at those years, which are often called Arctic Ireland.

The first signs of climate change in Ireland saw an extremely violent storm blowing in from the east, beginning on 29 December 1739. Nowadays we know what to expect when we experience an easterly windflow, but the winds of this storm brought a bitter, penetrating cold, and although the wind would die away after a few days, there was no relief from the cold. It intensified all through January, causing rivers and lakes to freeze-over almost immediately. The Shannon, the Liffey, Lough Neagh and Lough Corrib were all affected – nowhere escaped this freeze. And neither did Britain or most of Europe.

This was a novelty for the population Ireland, with people not realising what was to follow. The pleasant, benign weather of the 1730s led individuals and organisations to organise banquets, music, dances and other forms of entertainment on the ice, many with fatal consequences, however. Hard as it is to believe, there is evidence of a hurling match being played on the ice outside Portumna, CountyGalway. Records, though scant and unfinished in most cases, show that people were using the frozen lakes and rivers as shortcuts, and although more than a foot-and-a-half of ice prevailed in most areas, there were also places where it was no more than wafer-thin. In these spots it would often disintegrate when weight was applied, resulting in the loss of many lives. Among those recorded lost in this manner was a group of 20 mourners attending a funeral. They either drowned or rapidly froze to death when the ice gave way beneath them. Records do not mention the location of this incident but confirm that it did take place. Daytime temperatures of zero to -12° Celsius were widespread, with Ireland under a vast area of high pressure, which ran from Russia to Italy and all points in between.

While the Great Famine favoured urban dwellers, this was not the case with this one. In the beginning, townspeople had to live in iced-up homes with no way of heating them. But it was less onerous for country people. They had access to turf, which reached hugely inflated prices. All machinery used in the processing of food was frozen solid, so no harvesting was possible. It was down to what you could forage as to whether you could feed yourself.

Clergy from all denominations solicited food from the upper classes and distributed most of it to those suffering in the urban areas. The potato crop was frozen solid in the ground and could not be saved unless planted deeply or in peat. Even then, most of what was taken out was unusable and inedible due to the damage caused, meaning there would be no seed to plant the next crop.

The spring of 1740 was drought-like, which reduced cereal and other crops to less than half the usual production, with prices going sky high. The weather pattern was unpredictable, too, with severe cold winds compounded by heavy snow in May. By mid-summer, the country was in chaos, but somehow, turf was harvested and brought home. As animals became victims, with sheep and cattle dying from a combination of hunger and atrocious weather, rural dwellers were now feeling the effects as much as urban folk. They began moving to the towns which, by now, were better supplied than the countryside.

Blizzards swept the nation in August and September, with heavy snow in October, meaning the rivers and lakes were again frozen. In December, there was more snow – this time over two feet of it. Then, ten days later, there was a thaw, but the rising temperatures caused more flooding. By now, diseases such as typhus, dysentery and, above all, starvation were claiming the lives of thousands as a full-blown famine took hold. The total death toll would exceed 400,000, while some who have studied the sparse records put the figure at 40% of a population of two-and-a-half-million. Whichever figure you look at, the 1740 famine cost more lives per capita than the Great Famine of 1847, when more than a million would die out of a population of 8,175,174, as registered in the census of 1841.

The first half of 1741 saw the highest fatality rate. This period is known as “the year of the slaughter”. It would take up to 50 years to recover and, once again, the population was further decimated by emigration. The period around Christmas 1740 saw widespread rioting over lack of food and the high cost of what was available, while many who had stockpiles of food held on to it. There were some notable exceptions. The then lord mayor of Dublin, Samuel Cooke, tried to find a way to bring costs down. One of the people he consulted was the Church of Ireland archbishop of Armagh and primate of all-Ireland Hugh Boulter. The archbishop set up an emergency food programme for the poor of Dublin at his own expense. The widow of William Connolly, who built Castletown House, distributed cash and food from her own resources. Many others did likewise. They also created unnecessary jobs to aid the poor, giving them an incentive to carry on.

With normal weather returning in July 1741 and shipments of grain and food beginning to arrive at ports, food became abundant, and although the autumn harvest was mixed, at last there was enough to feed everyone. This was the end of the famine, with weather and crop production returning to normal.

Ireland experienced severe winters in other years, most notably in 1783 and ’86, which might be attributed to volcanic eruptions in Iceland; and again in 1816, when an eruption of Mount Tambora on the island of Sumbawa in Indonesia altered weather patterns all over the world. Ireland’s last famine (known as the “mini-famine” or an Gorta Beag) happened in 1879. This was more about hunger than lives lost. Once more, weather patterns were responsible, with summers either too wet or too dry and winters too mild or too cold, which led to a series of total crop failures or poor returns over a number of years, most notably in 1885, 1887-88 and ’89 into ’90.

If we go back to the Great Famine, some excuses for the disaster suggested that Ireland was over-populated. But this can be countered with the fact that we also had a huge food surplus, which was proven by the amounts exported to Britain during that time. Perhaps if the population had been fed the surplus food, many of the million who starved to death and those who died on the coffin ships would have survived.

We know the potato crop failed but every other crop was saved in abundance, and rather than using it to feed the Irish poor, it was taken across the sea to where it was not really needed. Connaught was most affected by the 1879 failure. However, this time, Britain did respond quickly. By now, a railroad service covered the country, so it was possible to transport food to where it was needed in just a matter of days. Another bonus was that since the Great Famine, land had been redistributed in a fairer manner, while emigrants working abroad were sending support to their beleaguered families back home. It was the failure of the 1879 cereal crops that caused shortages, leading to the situation being defined as a famine. Many moved from the rural areas into towns, but with the return of normal crops in 1780, they quickly returned to their lands.

You will read more about the revival of religion and the Land League during this period than the famine. The biggest news story of the time was the apparitions of the Blessed Virgin Mary, St Joseph and St John the Evangelist at Knock, CountyMayo on 21 August 1879. That is another story in its own right, which we will visit sometime in the future.

After darkness, there always comes light

Hold fast, we’re not there yet!