‘If the gardaí hadn’t come along, I don’t know if we’d be here today’

THREE fishermen were viciously assaulted last Thursday evening by a gang of youths in Carlow town, resulting in all three being hospitalised. Jackie Owens, and brothers Jim and Michael Murphy were set upon by the gang on the banks of the River Burrin in Carlow town centre. “If the gardaí hadn’t come along, I don’t know if we’d be here today,” Jackie told The Nationalist. 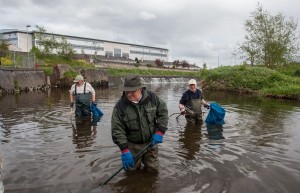 Jackie Owens and Mick and Jim Murphy cleaning up the River Burrin just a few weeks ago. The three were subjected to a vicious beating just a short distance from here
Pic: Michael O’Rourke

The three veteran anglers were walking on the river bank at approximately 7pm on Thursday when “two young lads came flying up on horses”. Jackie confronted the pair, telling them to get off the track because they were a danger to the public and threatened to call the gardaí if they didn’t leave.

One of the young men then hit Jackie on the back of the head and he fell to the ground.

“Before I knew it, there were about three fellas kicking me when I was on the ground,” he continued.

He looked up and saw that his two friends were also surrounded by young men who were kicking them, too.

“I was trying to make my way towards the others and I got hit again. They kept hitting us,” he explained. “Michael tried to roll away from them and they beat Jim where he lay.”

Jackie said that the vicious young thugs tried to throw him into the river but that he “blacked out” before they got the chance. “I got such a hiding that I kept blacking out and coming back,” he said. “I’m black and blue with bruises. One of them must have stepped on my head because I’ve got bruises all over my head.”

A woman who was at the scene tried to help the three friends and the gardaí and ambulance service arrived soon afterwards. All three were brought to St Luke’s Hospital, Kilkenny, where they were kept overnight, while Jackie was also kept in on Friday night for observation.

Jackie sustained bruising all down one side of his body, while Michael and Jim suffered lacerations to their faces and bruising to the head. The three have since been recovering from their horrific ordeal and are deeply shocked by the viciousness of the assault.

They’ve been fishing in the town “all of their lives” and recently featured in this newspaper because of the months of work they spent taking rubbish out of the Burrin.

Between cleaning the river during the afternoons and fishing at evening time, the three are a familiar sight to people living in the town.

Jim, also known as Murph, sold fishing tackle and bait from his shop on Tullow Street and would have advised generations of fishermen in the town over the years. Jim, Michael and Jackie all lost valuable equipment during the attack, with Jackie’s bait box being destroyed.

“It’s taken years to build up the collection of flies – there must have been up to €500 worth in the box,” he said. “They can be replaced, but they have sentimental value that can’t be.”

Jackie has also vowed to return to his beloved River Burrin when he has recovered from his ordeal.

Councillors back prison term for damage to life-saving devices

Fears for the future of Carlow Women’s Aid