PJ’s first single is top of the charts 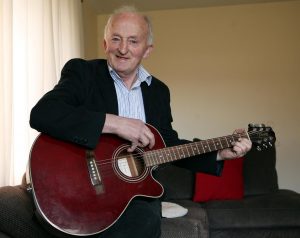 Now, having sent it to various radio stations where it has received positive reviews, PJ is sitting pretty at the top of the charts.

The Mortarstown native, who recorded Listen to the Wind with legendary producer Bill Shanley, has been blown away by the response to the poignant love song. Having entered the charts on Tom Dowling’s country show on KCLR relatively high up, PJ is now perched proudly in the top spot – for two weeks in a row.

“It’s getting great reviews. The CDs will be out in about two weeks. Sure, we’ll see what happens,” beamed PJ.

To listen to the song, tune in to KCLR, search for it on YouTube or keep an eye on record shops in the coming weeks, as hard copies will be available to buy.

Check out www.pjbrennanpoetry.com for some of PJ’s great written works.

Holy Angels overwhelmed by offers of help after van dies