GETTING mucked up to the eyeballs, making mud pies and generally having great fun outside, whatever the weather, is how most of us remember our childhood.

That freedom to explore the great outdoors is often curtailed for children nowadays, but that’s about to change for the youngsters who attend the Rathoe Community Childcare facility, because its new building is designed specifically to encourage indoor/outdoor play.

“We have a half-acre to develop into a natural play area for the children to explore and learn in,” centre manager Sinéad Donnelly told The Nationalist.

The grounds will feature different terrains such as sand, gravel or grass, and scattered throughout will be hidey-holes, dens or little fairy houses for the children to play hide-and-seek or to shelter from the rain, if necessary. There will also be tractors and trailers, wheelbarrows and shovels for the children to learn basic skills. Birds and wildlife will be introduced, while young trees and plants will also feature. The grounds will develop and change, according to how the children use them. 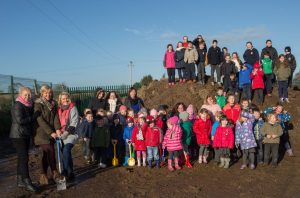 Sinéad, who has a background in science and as a surveyor, believes that children can even learn the basics of science and engineering through practical play.

“If you give children the right environment to learn in, they’ll work away with it. It’s about getting the children to think for themselves,” Sinéad continued. “It’s learning through osmosis: they don’t even realise that they’re doing it. The benefits of outdoor play for children’s immune system and physical and mental health are huge. It also aids their holistic development and resilience.”

The community childcare building itself is based on a Scandinavian model, where natural, renewable materials are used. Each classroom will have French doors opening straight onto the gardens, so the children themselves can decide whether to play inside or outside. Hail, rain, sunshine or snow – the weather won’t matter because the youngsters will be kitted out with waterproofs or whatever else they might need to play outside.

Rathoe is one of only ten community childcare centres in the country to receive funding of more than €300,000 to complete the new building. The service was first set up in 2007 and has had several temporary homes since then. They are due to move into their state-of-the-art new facility, situated beside the parish hall, in April.

“It’s been a long time coming. We’re bursting to get into it now. It’s going to be fantastic,” a delighted Sinéad concluded.

If you’d like more information about the services provided by Rathoe Community Childcare Centre, call 059 9148879.