JUST a few years ago, David Mullins left school in Bagenalstown to follow his dreams and last Saturday they came true.

The 19-year-old jockey from Goresbridge won the Grand National last Saturday aboard the 33-1 shot Rule the World.

It was momentous day for the Mullins family, who have strong Carlow connections.

His mother Helen, who has been in Carlow 30 years as owner of A Touch of Class boutique, travelled to Aintree to cheer on her son along with her younger son 11-year-old Charlie. 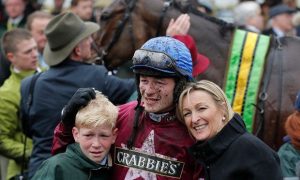 “It’s incredible. I didn’t see the race. I was just trying to keep my eyes on his blue hat. He had a really good position all the way around and he stayed out of trouble,” Helen told The Nationalist yesterday (Monday). “He just hit the front at a really good time.”

She added: “It was just surreal. I went over to support him and, hopefully, not to pick him off the floor. I never thought he would win it. He was so cool; it was amazing.”

The Mullins name is, of course, synonymous with horses, and David began riding ponies when he was three years’ old and did show jumping as a youth.

He was in school in Bagenalstown for only a few months when he made the life-changing decision to leave in fifth year after a long battle with his parents.

“He was only an amateur riding in bumpers then. I lost the fight and he gave up school,” said Helen.

Helen recalled a remark made by his then-principal Gerry Watchorn.

“He said: ‘Helen, he is not a bad kid, he is very bright but this is not his thing and if I were you, I’d let him follow his dream’ … well, his dream has come through!”

While Helen and her son Charlie, who goes to school in Paulstown, travelled over to support David in Aintree, the rest of the family were back in Ireland. David’s father Tom had horses riding in Wexford. Sister Katie (18), a student at St Loretto’s College, Kilkenny, was preparing for her leaving cert, while the jockey’s 15-year-old sister Kimmy, who attends St Lazerian’s in Carlow, shouted on her brother from home.

Parents urged to be vigilant with teenagers over house parties

Every home in Ireland has come to know Dr Tony Holohan