A BAGENALSTOWN farmer has been left devastated after a fire ripped through his pig house and killed over 1,000 pregnant sows.

Pat Roche from Monemore, near Bagenalstown, told  The Nationalist that he was “totally heartbroken” after 1,050 sows, at different stages of pregnancy, perished in the inferno that broke out on Thursday 28 July. 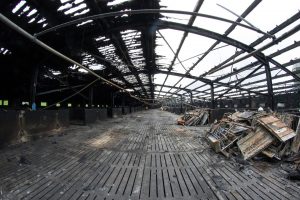 The burnt-out shell of the pig shed at Monemore, near Bagenalstown, where 1,050 pregnant sows died in a raging fire recently
Photo: michaelorourkephotography.ie

The fire started after an extractor fan burst into flames, with the fire spreading so fast that the livestock and the shed were completely destroyed in less than 30 minutes.

“It all happened very quickly Ǿ it was over in half-an-hour,” a shocked Pat continued. “It was too sudden to let the sows out. Thick, black smoke filled up the place. If anyone had gone in there, they wouldn’t have come back out.”

Firefighters from Bagenalstown, Tullow and Carlow rushed to the scene, but by the time they got there, the 25,000 square-foot shed was destroyed.

Pat, his wife Angela, their four teenagers and the seven members of staff are coming to terms with the tragedy.

With each sow capable of carrying 15 piglets each, the loss is enormous. “That shows the enormity of it. It’s a colossal financial loss. Our production cycle has been totally taken away because the dry sow room is like the engine of the business that keeps it running,” Pat pointed out.

He reckons that they have enough other pigs to keep the business open until just before Christmas and then they’ll be forced to close because they can’t restock until the insurance is sorted out.

“There’s 33 years of work gone down the Swanee,” Pat said.