YOUNG showjumper Mikey Pender has announced himself on the senior international stage in some style by winning not one, but two medals in the same competition at the World Showjumping Championships for Young Horses in Lanaken, Belgium.
The 16-year-old Knockbeg College student qualified two horses for the final of the five-year-old category and he was determined to make them count. 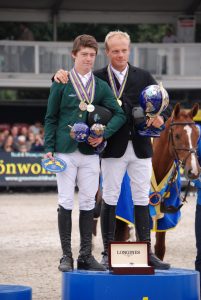 In a massive field of 229 horses from around the globe, Pender from Madge’s Lane on the Carlow-Kildare border, qualified both for the final 20-horse jump-off and he took an early lead with the mare Z Seven Canya Dance. He later beat his own target when his second mare, Z Seven Caretina. Both mares were bred by the Hughes family in Kilkenny where Pender spent a good portion of his transition year gaining valuable experience. By the time all riders had completed the course, his two rounds were good enough to secure the silver and bronze positions behind winner Willem Greve from the Netherlands.
Young Mikey was quick to downplay his fantastic achievement, choosing instead to highlight the form shown by the two horses.
“The horses that won silver and bronze were very consistent all year,” he told The Nationalist. “The one that won bronze also won in Dublin for the five-year-old category. They performed to their best out there last week.”
The competition was of a very high standard in Belgium but the local rider was unfazed by the pressure.
“I’ve been to a few shows like that so it wasn’t too bad,” he said. “It’s a championship so it is a different atmosphere I suppose. You think you have a chance going over, but for it to actually happen is amazing.”
He also had the added bonus of scoring a win in the consolation final for six-year-olds on his own horse, Curra Clover Flight.
“She was unlucky not to be in the final, but that’s the way it goes,” said Mikey. “200 started on Saturday in the consolation final and she won it.”
For someone so young to make such an impact in a senior championships is a sign of serious talent. And there’s no time for rest either as this week he has travelled out to Morocco for three weeks of competition. Fifth-year classes in Knockbeg will have to wait for the time being.
“School support me and I try my best when I’m not there,” he said.
Speaking after the competition, Comdt. John Ledingham, manager of the Irish Sport Horse team, was glowing in his praise of the young rider.
“To win two medals is a fabulous performance,” he said “Michael has had an incredible season. He was on the Irish junior team at the European Championships and also had brilliant results in the young horse classes at the Dublin Horse Show. We had a very strong team of young horses in Lanaken this year and to get 12 through to the finals was exceptional.”