THE Trojan efforts of a group of local climbers to raise funds for Éist Cancer Support Centre were celebrated recently.

A ‘Thank You’ night was held for the five men who helped raise €41,000 for the support centre by climbing Mt Kenya, Africa’s second-highest peak. 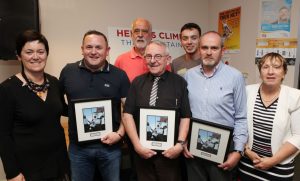 The event had started out as a tick on Rev Peter’s bucket list to celebrate his 70th birthday but spiralled into a major fundraiser for the cancer service.

Éist chairperson Mary Smith explained how import this fundraiser was and thanked all who had supported it.

The cost of running Éist is roughly €120,000 a year, with 90% of the money raised through voluntary fundraising, coffee mornings, mini-marathons and other events.

“The money raised through the climb has financed directly one-third of our costs for 2016. It’s vital, absolutely vital, funding for us,” she said. “All those involved with Éist centre are so grateful to the climbers, who funded the complete cost of the trip themselves, all of the businesses who sponsored and Rev Tarleton’s parishioners, who showed incredible generosity.”

One of the climbers, Ben Condell, filmed a ten-minute video of the climb, which was played at the ‘thank you’ night. It proved a moving watch, detailing the breathtaking Kenyan countryside, the physical exertion of the climb and the camaraderie among the group. It also gives a more intimate peak at the climbers themselves and what motivated them.

Rev Peter and Dick Murray are both cancer survivors, while Thomas Neale’s late wife Kate received tremendous support from Éist before her passing.

“The climb itself was symbolic of anybody who receives the shattering news of cancer diagnosis themselves and their journey from diagnosis through surgery, treatment and the road to recovery,” said Mary.

The video captures the highs and lows of the ascent, from the climbers battling altitude sickness to the spectacular morning when the group reach the summit.

The video can be viewed on Éist’s Facebook page and is well worth watching.

A framed photo of the climbers on Mt Kenya’s Lenana Peak, some 4,985 metres above sea level, was presented to each man.

A draw was also held on the night and Sarah Tipping won the first prize − an overnight stay in the Lord Bagenal Hotel and a tour of horse trainer Willie Mullins’s stables.