Crucial goals send Palatine on their way to senior crown

TWO goals in five second-half minutes powered Palatine to their second senior football championship title in a row at Netwatch Cullen Park on Sunday afternoon.
David Reid coolly slotted his team’s first after a dazzling move through the Rathvilly defence on 37 minutes, and five minutes later Ciaran Moran finished sublimely to the net to open up a five-point gap. The champions never looked back. 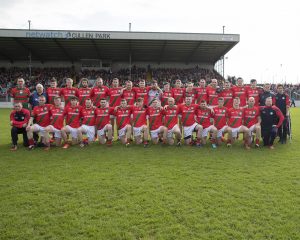 Such was the composure with which they closed out the game in the final 10 minutes that the men in red could take the time to enjoy the occasion and prepare for the explosion of colour from their supporters which greeted a historic victory. 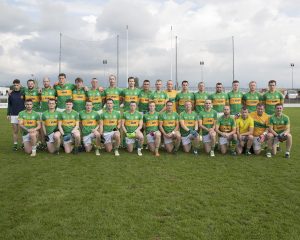 By winning Sunday’s final, Palatine clinched their sixth senior championship and with it, their first back-to-back since the victorious teams of 1919 and 1920. The club have produced a new set of heroes who displayed old-fashioned virtues like a willingness to work hard and a determination to stand up to the physical challenges presented to them. 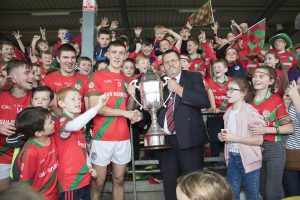 But there was plenty of youthful verve on show too, with the likes of Shane O’Neill and Conor Crowley gelling with the wily, experienced heads like the Reid brothers.
In the end it looked easy, and yet for much of this game Rathvilly gave as good as they got. The teams were level five times and it was 0-8 apiece in the 36th minute, just before Palatine finally took the game by the scruff of the neck. Indeed, in the first half it was the Rathvilly men who looked to be moving far more smoothly, especially in attack where JJ Smith and Gary Dempsey in particular dragged the Palatine defence this was and that with devastating effect. 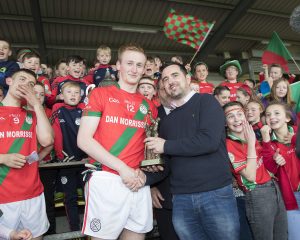 Brendan Murphy, who returned from the US in time to make a big contribution in their semi-final win over Old Leighlin, was selected at midfield but he switched into wing forward from the start with Ed Finnegan and Ken Doyle stationed in the middle.
And it was Doyle who made the first drive into enemy territory to set up Gary Dempsey for the opening point after two minutes. Palatine’s reply was swift with Shane O’Neill’s show-and-go opening up the space for a lovely point. Then David Reid scored after a positive run by Palatine captain Jason Kane.
However, it was Rathvilly who totally took over for the next 15 minutes. Ken Doyle released Dempsey again, who was asking serious questions of Conor Lawlor early on, and the full forward fisted a second point before points from JJ Smith, Doyle and Brendan Murphy made it 0-5 to 0-2 on 15 minutes.
However, the Palatine defence slowly settled into the game and tried to place the shackles on their free-running opponents.
Up front Palatine struggled to fashion decent scoring opportunities against a tenacious Rathvilly full-back line, but Shane O’Neill was having a good day from frees and he slotted three over the bar. Goalkeeper Craig Kearney also came forward to stroke over a free from distance to leave it 0-6 apiece at the break. It was finely balanced.
It was tit-for-tat in the opening exchanges of the second half with Brendan Murphy’s point, after a lovely pass from Gary Dempsey, cancelled out by Tomás Kenny. Then Alan Kelly’s fine score on the run for Rathvilly was matched by a Conor Crowley free, a just reward for the corner forward who was proving an influential figure in his side’s attack.
Then came the first defining moment of the game and a fantastic move involving Shane O’Neill and Crowley, Ciaran Moran and David Reid opened the space for the latter to slot the ball to the net. It was a goal of real quality which seemed to be worth more to Palatine that the simple addition of three points.
Ed Finnegan replied with a Rathvilly point but soon after, a searching ball into the Palatine forward line by David Reid seemed to bounce off the hands of Conor Crowley and, fortunately, into the hands of Ciaran Moran who was arriving like a train to drive into the square and expertly slot his side’s second goal. Suddenly, on 42 minutes, Palatine were five ahead – 2-8 to 0-9 – and Rathvilly were chasing the game.
They needed a response and while Gary Dempsey and Ed Finnegan found the posts, each time Shane O’Neill replied for Palatine with excellent frees from distance. The young wing forward was producing a big performance. Unerring from frees he was also getting through an ocean of work in the trenches alongside the likes of Jason Kane and Christopher Crowley who were not allowing Rathvilly to wrestle back the momentum.
Further back, Conor Lawlor, Mark Rennick and Conor O’Doherty were vigilant while also providing the springboard for attacks from deep.
Going into the final five minutes, there was little doubt Rathvilly needed a goal. But in truth it never looked likely and with wing-back Stephen Reilly and sub Paul Reid also getting in on the scoring act late on, Palatine had the Conlon Cup in the bag long before the final whistle.
Palatine: Craig Kearney (0-1, free); Conor O’Doherty, Conor Lawlor, Mark Rennick; Stephen Reilly (0-1), Christopher Crowley, Jack Brennan; David Reid (1-1), Jason Kane; Niall Reid, Ciaran Moran (1-0), Shane O’Neill (0-7, 0-6 frees); Jamie Kenny, Tomás Kenny (0-1), Conor Crowley (0-1, free). Subs: John Reid for J Kenny (44 mins), Paul Reid (0-1) for D Reid (57 mins), Brian Kelly for S O’Neill, (61 mins), Bryan Farrell for C Moran (61 mins), Chris Parle for B Farrell (62 mins, black card)
Rathvilly: Robbie Molloy; Barry John Molloy, Tony Bolger, Keith Curran; Jeffrey O’Donoghue, Wayne O’Donoghue, Colin Byrne; Brendan Murphy (0-2), Brian Murphy; Ed Finnegan (0-2), Danny Molloy, Alan Kelly (0-1); Ken Doyle (0-1), Gary Dempsey (0-5, 0-3 frees), JJ Smith (0-1). Subs: Jim Bob Leonard for J O’Donoghue (40 mins), Conor O’Brien for K Doyle (42 mins), Daniel O’Brien for Brian Murphy (45 mins), Robbie Ryan for D Molloy (50 mins), Brian Smith for E Finnegan (55 mins)
Referee: David Hickey (Fenagh)