ST ANDREW’S brought the intermediate football championship title back to Bagenalstown on Sunday evening after a hard-fought final at Netwatch Cullen Park.

The St Andrew’s side who beat Naomh Eoin in the intermediate football final at Netwatch Cullen Park Photos: michaelorourkephotography.ie

St Andrew’s ability to pick their way through the Naomh Eoin defence for goals proved crucial as they kept beyond the reach of the Myshall challenge in the closing stages.
Andrew Beaton was the most influential player for the champions and his tally of 1-4 put his team on a solid footing. He was handed a red card for an altercation in the middle of the field with five minutes of normal time remaining, but by that stage his team were well on their way to victory.

The game was notable as much for profligate shooting as for points taken and if Naomh Eoin has their shooting boots with them, this game would have been much closer. But a series of poor wides in the last quarter meant St Andrew’s never really felt the heat from their opponents.
The Myshall side were over-reliant on the strong running of Cillian McCabe throughout while a disciplined St Andrew’s defence, for whom Martin Cummins was outstanding, kept their opponents away from the goal for most of the game. 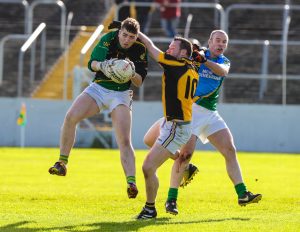 Further forward John Doyle and Alan Corcoran made sure the momentum stayed with St Andrew’s and plentiful ball was supplied for the likes of the Beaton brothers and Jamie Clarke to do some damage.
Naomh Eoin got the first score of the game through McCabe after he was released by Donal Smithers.
But within five minutes Andrew Beaton had them level after Alan Corcoran turned over ball in the middle of the field and Martin Cummins drove at the heart of the Naomh Eoin defence. St Andrew’s had a first sight of goal after John Doyle got in behind, but his pass to a team-mates wasn’t capitalised upon. 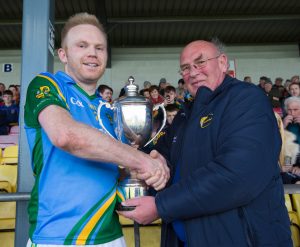 It didn’t take them long to find the net however and when Alan Beaton found his brother, Andrew turned and spotted the run of Darren Crooks. The pass was weighted perfectly and the full forward rattled the net.
Donal Smithers got one back for Naomh Eoin from a free but St Andrew’s were taking a grip on the game.
By the time Andrew Beaton’s shot at goal was allowed to bounce over the bar in the 26th minute the score was 1-4 to 0-2 for the Bagenalstown side.
Naomh Eoin needed to make an impact before the break and they did when Eoin Redmond’s lovely ball across the square was coolly slotted to the net by McCabe.
Two minutes later Jack Kavanagh raced forward from corner back to take a pass and loft a nice Naomh Eoin score to make it a one-point game – St Andrew’s 1-4 Naomh Eoin 1-3 – at the break.
Whatever benefit Naomh Eoin gained at the end of the first half was almost wiped out in one fell swoop at the start of the second though when an intricate move involving Shane Clarke, Alan Corcoran and Andrew Beaton put Liam Galway in on goal. He was dragged back as he swung his leg and although the ball went over the bar the referee Jonathan Murphy decided the advantage wasn’t enough and he awarded a penalty. Andrew Beaton found the net with ease to make it 2-4 to 1-3.
To Naomh Eoin’s credit they fought back again. McCabe pointed and Donal Smithers slotted a point from a free after St Andrew’s full back David Miley was black carded. Naomh Eoin looked to have an opportunity to push on.
But within a couple of minutes St Andrew’s reaffirmed their superiority. Andrew Beaton found space in the square and when he passed to Jamie Clarke, the centre forward cleverly stepped back inside his marker to score his side’s third goal.
The Naomh Eoin rear-guard was proving far too generous and although the men from Myshall were able to gather more than their fair share of possession, they could not trouble the scoreboard often enough.
John Michael Nolan did find the posts with a nice effort on 39 minutes to make it 3-4 to 1-6 but when Philip Smithers was black carded at the three-quarter mark their hopes of staging a comeback were further dented.
The game was bogged down in the middle third for much of the remainder of the game although Adam Kenny did drive forward for a nice Noamh Eoin point.
Andrew Beaton scored St Andrew’s final point from a free on 44 minutes and it says much about the game that they could afford not to trouble the posts form there to the end and still win by three points.
Naomh Eoin had one more half chance of a goal as the game ticked into stoppage time but Eoin Redmond’s shot on goal rose over the bar for the game’s final score.
St Andrew’s now look ahead to Leinster where they will take on St Joseph’s of Louth next Saturday up in the Wee County.