The Forum: Sporting joy in its purest form

IT was probably the best attended sporting event in Carlow this year. Some of those who were present may not have been into sport as much as others, but they were not going to miss this one. This was a celebration of excellence for schools, their teachers, parishes, parents, players and volunteers. 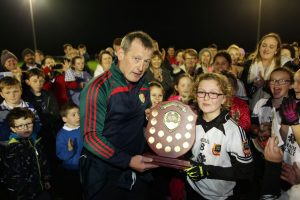 The Cumann na nBunscol football finals (or for those who don’t have the cúpla focal, the primary schools county finals) took place over two nights at the Training Centre in Fenagh last Tuesday and Wednesday. The staging showcased human behaviour at its best and was a reminder of the glory of sport. 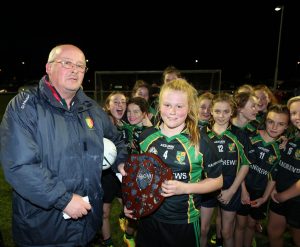 Even someone who has only a passing interest in GAA knows the odds of one of the small counties winning an All-Ireland senior football title are remote. Yet every year the Carlows, Wicklows, Leitrims and Antrims make a ritual exit from the provincial and All-Ireland championships.

Leah Connolly from Ballinabranna NS receives the cup from Cathal Cole after their win in the girls Division 2A final Photo: Karl McDonough

If the organisers of the Cumann na mBunscol finals were to take a similar approach then the big schools would win every time. That is why there are five different deciders for both boys and girls. With five divisions (1, 2A, 2B, 3 and 4) there is an opportunity for every school in the county to make it to county final day. Don’t forget there is disappointment for the schools who don’t qualify. Their contribution should be acknowledged too.
Yet for those who make it through, this is their All-Ireland. 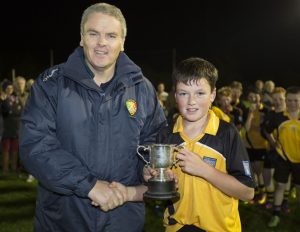 The build-up begins well before the big day with much thought going into an informative match programme which details sponsors names, start times, referees and names of participating schools.
Then there are the team lists. The schools go to considerable trouble to make sure the numbers of the jerseys match the player names on the programme. For the bigger schools that has to be a logistical nightmare but it is worth getting it right. A number on a jersey which can be traced back to the name and number on a programme gives players a sense of identity. Astute parents and guardians would hold onto the programme and in years to come a dip into the family archives can bring back memories of happy days in national school.
The Cumann na mBunscol finals used to be held on a Saturday with all 10 matches taking place on the one day. In recent years they have taken place midweek during school hours. Last year for the first time they were moved to midweek at the Training Centre.
Judging by the crowds and the atmosphere this year, the decision was vindicated. Saturday for the modern parent includes multiple trips to rugby, soccer, hurling, stage school, music lessons etc. There is enough happening at the weekend.
So to the finals. It is not too often you get traffic congestion at the Training Centre. Last week was an exception. As queues built up there might have been some mutterings but the message is loud and clear. Come early next time.
On the pitch, players behaved in an exemplary manner. The ball was all that mattered and if on the odd occasion someone crossed the line, referees were quick to intervene.
It was good to see current intercounty referees, brothers David and John Hickey on duty while Enda Hulton, Pat Kehoe and John Kearns all did a great job. Abuse of referees is common place in games throughout the country but the large crowds enjoyed the games and referees were given the respect which should be afforded match officials at all times.
The two nights were all about sport. The players loved playing under lights. The big crowds led to a party and celebratory atmosphere for both winners and losers who enjoyed a fabulous evening of sport. Even the weather played its part. How many balmy and rain free days do we usually get towards the latter end of October.
There was one amusing incident where a mentor forgot himself.
“Foul him there,” he said as his side held on to a narrow lead with the opposition carrying the ball out of defence. Not spoken too loudly, his players didn’t hear him. Even the speaker put his hands up and grinned sheepishly.
The bottom line. Whether it was stewarding, refereeing, umpiring, coaching, organising or merely turning up as a parent, sibling, aunt, uncle, grandmother or grandfather, this night was all about making the Cumann na mBunscol finals a night to remember for the players. A huge debt of gratitude is also owed to the teachers in the schools who gave their free time to get their charges to this happy day.
The hurling and camogie finals take place in the springtime. We’re looking forward to it already.