FROM time to time you see stuff in this sporting world that just makes you throw your hands up in the air and wonder where people left their sanity. Things that make such little sense you wonder if it’s all just for laughs. In recent weeks it seems as if football has produced some cracking examples. The sport by no means holds the patent on idiocy but three incidents make you realise that common sense really isn’t so common after all. 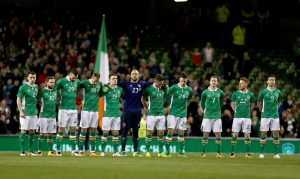 The Republic of Ireland team line up ahead of their friendly game with Switzerland last March wearing a jersey which features a 1916 logo, against Fifa policy Photo: Inpho/Donall Farmer

Before the weekend, news broke that Fifa has opened disciplinary proceedings over the Republic of Ireland’s use of a logo to commemorate the centenary of the Easter Rising in their friendly against Switzerland last March.
The logo was said to contravene Fifa’s policy on the use of political, religious or personal logos on team garments. It comes in the wake of the controversy over the England and Scotland teams’ plans to wear poppies on their jerseys for their international game next weekend.
Of course, you can see the sense of having such a policy in a broad sense. In sensitive parts of the world it’s correct that sport is not used as a vehicle for spreading hatred or discord.
But a fine for commemorating a historical event in a manner that is in no way triumphalist?
It burns just a little that it seems Fifa’s hand has been forced on the issue ever so slightly by the Scottish and English FAs who highlighted the use of the 1916 logo and said that not to allow them display the poppy would be a case of double standards.
Of course, quite where Fifa gets off on being anyone’s moral compass is a whole other argument.
If the two teams are happy enough with a particular gesture is it really anyone else’s business?

2 The whole Pep and Yaya thing 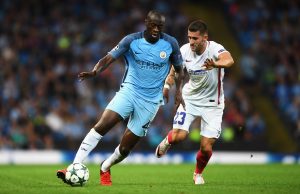 Yaya Toure hopes his apology will open a way back into the first team at Manchester City Photo: Getty

Last week Manchester City midfielder Yaya Toure apologised to the club for “misunderstandings from the past”. There has been a standoff between the player and the club, or more specifically the manager Pep Guardiola, in recent months over comments made by Yaya’s agent Dimitri Seluk. He had questioned Pep’s decision to leave the former star player out of the club’s squad for the Champions League and said his player had been “humiliated”.
After a couple of months out in the cold and tit-for-tat verbals between Pep and Seluk, Yaya has finally seen the light and said: “I wish to apologise – on behalf of myself and those who represent me” for what was said.
Some football agents have been enjoying a pretty high status in recent years. Perhaps it’s understandable that some egos have been growing exponentially. If they’re taking a 10 percent cut of their players’ earnings, they’re getting very rich indeed. Yaya alone is on £200k every week. That’s not to mention the agent’s other clients.
Is it any wonder agents start to think that maybe they have influence above their station. Perhaps this is an example of where the player needs to tell the agent to stay in his box. But then Yaya hasn’t always struck you as someone with the clearest priorities.
This is the guy who threw a hissy fit because the club didn’t mark his birthday a couple of years ago. “None of them shook his hand on his birthday. It’s really sick,” Seluk said at the time.
Indeed. 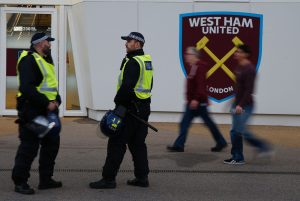 A visible police presence pictured outside The London Stadium ahead of the recent EFL Cup match between West Ham United and Chelsea Photo: Getty

West Ham and Chelsea are drawn together in the EFL Cup and a coterie of supporters take the opportunity to turn the clock back 30 years by laying into each other during and after the game.
In the aftermath, there was much hand-wringing about what might have been done better, but one of the explanations for the problem given much prominence was the design of the stadium. It was said that the original planning for the Olympic Stadium didn’t take into account the requirements for football stadia which make it easier to segregate rival sets of supporters around such difficult fixtures. Yes, there are extenuating circumstances which make it easier for a situation to get out of control and the Olympic Stadium was never designed for a possible future in football.
But very little of the discussion seemed to focus on the fact that this was all about two groups of human beings acting like gorillas. Has the idea of personal responsibility been thrown out the window entirely?
Perhaps the answer is sterner policing, and if people want to act the idiot, treat them with the contempt they deserve.