IRELAND’S rugby victory over New Zealand in Chicago, the World Cup qualifier win away in Austria and Padraig Harrington’s recent win on the European Tour are all recent examples of Irish men performing successfully on the European and world stage. 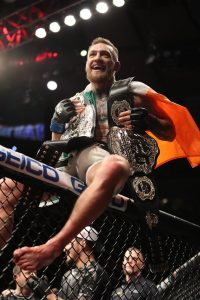 We are proud that our country fights above its weight and in a special way we seek to identify with and take ownership of these mighty achievements.
Which brings us to Conor McGregor and the sport, if we can call it that, of mixed martial arts. We celebrate the achievements of our rugby and soccer players, our athletes, our golfers and so many other successful Irish sportsmen and women. But why don’t we all celebrate McGregor’s “notorious” achievement in winning two UFC world titles?
To reflect. the UFC (the Ultimate Fighting Championship) is the premier organisation in mixed martial arts and enforces the unified rules of mixed martial arts. Early on Sunday morning, McGregor added a lightweight title to the featherweight crown he won when taking out José Aldo in 13 seconds at UFC 194 last year.
Yet for many reasons, McGregor’s success just sticks in the craw. In his post-fight comments on Sunday morning the man himself was hardly a picture of humility.
“Eddie (Alvarez) is a warrior but he shouldn’t be in here with me,” he said of his vanquished opponent. “I’d like to take this chance to apologise to…absolutely nobody,” he roared. There was plenty of foul language to follow.
Even before the fight, the Irish fighter used words which should truly be repugnant to all of us.
“I am going to toy with this man. I am really, truly going to rearrange his facial structure. His wife and kids will never recognise him again.”
It says a lot for the sport that MMA was banned in New York and was only legitimised this March. Yet in the lead up to this fight the city was adorned with posters advertising the UFC event. In typical Manhattan fashion, many people were going to make a bit (and a fair bit) of money from the event. The event was hyped as never before with Alvarez and McGregor as the main event of the evening.
McGregor doesn’t do humility. He captured the imagination of the American people and a sizeable number of Irish Americans who flocked into New York over the weekend to see the drama unfold. A frenzy without objectivity had been unleashed
If you like crassness, in your face insults, a lack of respect for opponents and everything most successful sportsmen and women in Ireland would abhor, New York was the place to be.
Mind you, it would have cost you. Our own Pat Hickey could hardly have competed with ticket prices not less than $1,000 while households were asked to fork out $60 for the TV rights. Entry to the local pub cost $20 before taking a sip at all.
The lure of the dollar. It was a touch ironic that McGregor’s latest series of obscenities should come in the wake of Donald Trump’s surprise election win. That success was based on a promise to marginalise even further those less fortunate in the world than Trump and his ilk.
His election has terrified many immigrants who have been forced to leave their own home, their families and their country in the hope of making a living in the USA. McGregor’s actions and soundings echo the Trump ideology where the strong get stronger with no place for the weak.
Perhaps it could be argued that McGregor’s pre-fight words are all just part of the fight game to boost TV figures. Trump too might suggest it is only locker-room banter.
Perhaps, but some of Ireland’s greatest boxing champions in Katie Taylor, Barry McGuigan and Michael Carruth never had to resort to such language to either motivate themselves or get a march on formidable opponents.
Apart from the insults and the behaviour of McGregor and those he fights, the sight of bloodied and battered opponents is not something which should sit easily on the shoulders of anyone. Sporting organisations all over the world have, over the last decade, made stringent efforts to ensure injured and bloodied players get immediate and expert attention. The sight of two fighters trying to inflict further damage on their opponents is distressing to say the least and while it might be stretching it, there is an element of roman gladiatorial times where the mob can determine the fate of the vanquished one.
On Sunday 16 October in Paris, Munster and Irish rugby legend Anthony Foley died suddenly. His passing shocked not just an entire rugby world but many others who only knew the Munster coach by name and deed.
Foley wasn’t just a much-loved rugby player. He represented a club, a parish, a province, a country, European and world rugby. Most of all, he was a decent son, parent and husband. McGregor and Foley may have been successful in their chosen sport, but they were poles apart. It didn’t have to be that way.
The Notorious one has diminished the achievement of a young Crumlin schoolboy. That young man went on to become a youth All-Ireland boxing champion before rising up through the MMA ranks. He eventually became one of the most talked about fighters in the world today. A little respect could have gone a long way.
He is now an Irish international sportsman with an ultra-high profile. Yet will he ever be spoken with the same sense of admiration and awe which so many great Irish sportsman have and will continue to be?