ROB Heffernan clearly knows his audience. He visited Carlow Educate Together School last week for a chat with the pupils about the importane of healthy living and to show off his newly-minted Olympic medal.
At the end of the visit he dropped a surprise. “No homework for anyone tonight!” The roof nearly lifted off the assembly hall as the youngsters cheered on the star athlete. 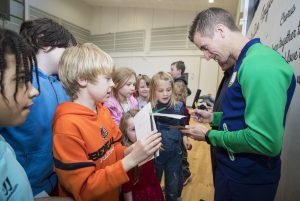 Rob Heffernan bronze medalist at the 2012 Olympic Games in London signs autographs during his visit to Carlow Educate Together NS. Photo: michaelorourkephotography.ie

It’s been an eventful couple of weeks for Rob. Four years after the disappointment of finishing fourth in the 50k walk at the London Olympics, he was finally presented with the bronze medal when Russian walker Sergey Kirdyapkin, who finished first, was disqualified for doping offences. As a result, everyone moved up a position and Heffernan took the bronze.
The official presentation ceremony took place in Cork and the smile still hadn’t left Heffernan’s face when he visited Carlow last week.

“Even now, I’m still only getting used to having it,” he said. “I only got in into my hands last week and it was a magical night in Cork, just magic. For sombody like me, I didn’t think that world was for me. But now to have a fill set of medals, I feel so priviliged.”
The Olympic medal will now sit on his sideboard alongside the bronze (20k) he won at the European Championships in 2010 and the World Championship gold (50k) he won in Moscow in 2013.”
“The knock-on effect is that I can have this impact for kids around the place and that’s important,” he said. For those of us who may have become slightly jaded by the seemingly endless merry-go-round of negative headlines surrounding top-level sport in general and the recent Rio Olympics in particular, witnessing the impact an athlete like Rob can have on a roomful of kids is the perfect tonic.
Long after the end of his speech he was signing autographs and giving tutorials on speed-walking technique up and down the hall.
One of the interesting angles of his talk was the fact that he didn’t excel at an athlete early in his career. Indeed, he spent most of his teenage years aspiring to greater things but never quite making the grade.
He contrasted his development with that of his wife Marian, a former champion sprinter.
“Kids develop differently,” he says. “My wife Marian won everything growing up. She was a sprinter. I was a small kid. I didn’t grow till I was 17. The main thing is to keep at it and keep workign and working. It’s not about the winning when you’re younger. It’s the attitude. You have to just go out and give it your best shot.”
It’s a valuable lesson for younger sports people who might think that just because they don’t excel straight away, they have no business taking part.
“That’s why this kind of thing is important to me,” Rob says. “If kids have someone to aspire to, they start believing they can achieve too. When they see that you’re not seven feet tall and you’re normal, it’s starts giving them that belief and gives them something to dream about.
I love coming to schools. I do a lot of it in my off season and I try to visit a school or two a week in September and October.”
It has been a long wait to finally get his hands on his Olympic medal. Doping controversies have touched all sports and although it was confirmed months ago that Sergey Kirdyapkin would be disqualified, Rob decided to wait until after this year’s Olympics before accepting the medal.
“The Olympics is the pinnacle,” he says. “I’ve been at five Olympics and that medal represents my best Olympic Games. I’ve done well in all. I was sixth in Rio. I was eighth and ninth over 20k in Beijing and London so my record is good. But to have a medal is the icing on the cake.”
Although he accepts that training doesn’t get any easier as he gets older, he turns 39 in February, Rob says he still has the appetite for comeptition next year with the world athletics championships taking place in London.
“London is such a short trip across the water, it’ll nearly be like a home World Championship and I’m 100 percent motivated,” he says. I didn’t think I was going to be. But after the Olympics in Rio, I thought I could have done better. I’m not happy with a couple of thing in the race and my prep. But I’m happy that I feel there’s more there. That’s the way I’ve always evaluated my career.”
With young children keeping him close to home, he says the days of long training camps abroad are proibably behind him.
“I’m happier at home,” he says. “I was miserable away at altitude training last year. Then Marian and the kids came away with me for the summer and it was great. I was able to train really hard and I had my family with me in the evening. At this stage of my life, I need that. I’d miss the girls. I have a one and a two-year old and it’s very hard being away from them because they change so quickly. A month is a long time.
But the motivation is I want to make it work. If I make a decision to train out of Cork and sleep in an oxygen tent at home, I have to make it work. You have to have the desire. That’s a big ingredient.”