The Forum: Lots to gain from World Cup bid

DOES anyone remember when the then Lord Mayor of Dublin Gay Mitchell mooted the possibility of Dublin hosting the Olympics back in 1992. The notion didn’t last for long. Leading the incredulity and sceptical brigade at the time was none other than the then Olympic Council of Ireland President, Mr Pat Hickey.
“We couldn’t even build the jacks,” he was reported to have said. 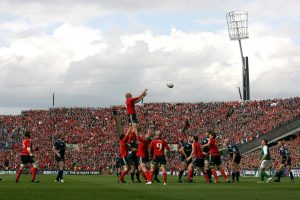 Munster’s Paul O’Connell climbs for a line out during the 2009 Heineken Cup semi-final at Croke Park. The rugby World Cup bid could bring many more rugby games to GAA grounds around the country in 2023 Photo: Inpho/James Crombie

While his alleged remark was undignified and unbecoming of someone in his position, he probably was right at the time. It was unthinkable the Ireland of the early 1990s could even contemplate hosting a major sporting event of any size.
Back then you would have been sedated and put to bed if you suggested Ireland would play England in a Six Nations rugby game in Croke Park. Then again who would every have thought an American Football game would get the go-ahead at the same venue.
After the historic clash of England and Ireland in Croke Park, the history books record that several Six Nations games have been played there, as has a Leinster v Munster Heineken Cup semi-final in 2009.
The unthinkable became the norm. From a pragmatic point of view much of the extra revenue from those games in Croke Park filtered back down to counties all over Ireland. Off the field, there were no losers.
By the way, on a local level in the 1990s, as Éire Óg went about winning five Leinster senior football titles, there were times they needed the use of the Carlow rugby club grounds. It wasn’t an issue for anyone. Both clubs came to an amicable arrangement. The rugby club even borrowed a set of Éire Óg jerseys at one stage. It’s what good neighbours do.
Back to rugby. In 1991, alongside England, Scotland and Wales, Ireland hosted the World Cup. In Lansdowne Road Irish hearts were broken by a late Michael Lynagh try while in the semi-final the Aussies beat New Zealand, the pre-match favourites and defending champions.
At the time it was all very well that Ireland hosted a number of games but did anyone really believe Ireland could host an entire tournament on their own?
Our infra-structure was not good. Just think how long it took to get to the airport from Carlow then. Depending on the time of day, maybe up to two hours. As for travelling to Belfast? Does anyone remember the bumper to bumper crawl through Drogheda and Dundalk?
Fianna Fail in their heyday promised to build a network of motorways. The might of the Soldiers of Destiny is no more but their much forgotten legacy which benefitted the country was the creation of a motorway system.
With a little help of the improved road system Ireland now has an established tourism industry. Dublin is now one of the most popular cities in Europe and it was recently announced Ireland Tourism has enjoyed its best ever year. The effects of the recession are far from over but the signs are improving with every passing month.
With Ireland’s 2009 Six Nations Grand Slam, a 2015 Championship success and their high profile in the European Club Championship and PRO 12 competitions it was more than appropriate the Union should apply to host the 2023 Rugby World Club with South Africa and France in opposition.
The bid includes 12 venues with seven of those stadiums having quick access to nearby airports.
Just to reflect on some of the chosen venues lifts the hair on the back of the neck. As well as established rugby venues Ravenhill, the Aviva Stadium, Thomand Park and the RDS arena the GAA grounds of Celtic Park in Derry, Casement Park, Croke Park, Nowlan Park, Pairc Ui Chaoimh, Fitzgerald Stadium, Pearse Park and McHale Park have been included as part of the application. The GAA world has come a long way when Tipperary folk are miffed that their own Semple Stadium has been omitted as a possible choice of venue.
The recent autumn international series showcased Irish rugby both on and off the field at its sumptuous best. The production and lead-up as the teams arrived onto the field added to the atmosphere. For the old traditionalist, like it or not the pyrotechnics display is here to stay. Those who don’t fancy it probably don’t like Christmas either. Rugby on the world stage has been well packaged and Ireland has not been left behind.
On the field, Ireland’s good form from a sea of talent couldn’t have come at a better time. Beating New Zealand and Australia is not supposed to have any effect on the bid. Yet human nature being what it is, these high-profile wins cannot but send out good messages which subconsciously will be absorbed by the decision makers.
Notwithstanding the possible effect which Brexit could have on industrial relations between England and Ireland, and north and south of the island, all is good with the 2023 World Cup bid. If there is one thing which has united politicians the island over, it is the thought of staging the World Cup on the island of Ireland.
Just one little gripe, and it is a little one. It is now a given that selling beer is part of big match day. What should not have become match day practice, but has, is the carrying and drinking of in the stands. In the three games against Canada, New Zealand and Australia up to 20 minutes leading up to half-time and 20 minutes into the second half there was a constant procession of so-called rugby fans carrying their fix back to their seats.
There is no need to go into the potential flashpoints and hazards. This is an accident waiting to happen. The practice needs to be dealt with.
Apart from that, Irish international rugby is in a good place both on and off the pitch. Hopefully a positive announcement next November in relation to Ireland’s 2023 World Cup bid will bring the game to a completely new level.