The Forum: Irish train derails before it ever leaves the station

AND just like that, Scotland took a pin to the Irish rugby team’s ambitions which had been inflated by those excellent performances at the back end of 2016. 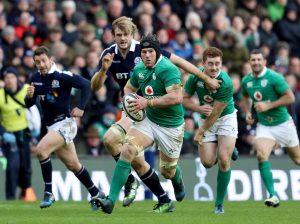 Ireland’s Sean O’Brien finds some space to run during the Six Nations game against Scotland in Murrayfield Photo: Inpho/Dan Sheridan

In a shade over 80 minutes, aided by a disjointed effort by Joe Schmidt’s team, the home side won on the opening day of the championship for the first time in over a decade and reminded us of the unpredictability of the Six Nations championship.
Just last week, when it was suggested that perhaps England would provide the sternest test to Ireland in this year’s tournament, Sean O’Brien said that he and the team had no business looking past the Scottish challenge. How prescient that turned out to be.
But half past four on Saturday afternoon, half the country was cursing the fallacy of thinking this might be a year to fight for a Grand Slam.
Joe Schmidt said something interesting in his after-match interview: “We arrived in the stadium about 10 or 15 minutes late and we were late for most things in the first half.”
It makes you wonder about just how finely tuned these athletes are and how even the smallest speed bump was knock the truck off course; the more precise your preparations, perhaps, the less able you are to deal with the imprecision of others.
And if there’s one thing which singles out Joe Schmidt from the rest, it’s his precision. It’s his attention to detail and his ability to instil that in his players which has made him such a successful coach at both provincial and international level.
It was always going to be tough to come back from a 16-point deficit and even though Ireland managed to overhaul that lead in the second half, perhaps the effort required to do so caught them in the final 10 minutes when Scotland finally swung the momentum in their direction once again.
So what are the positives as the rest of the tournament stretches out ahead of the team? Well, the manner in which they turned their game around in the second half was encouraging. If Jamie Heaslip had recycled the ball rather than going for a hopeful offload at a key moment, chances are we’d be looking at a convincing Ireland win.
Scotland’s defence was watertight in the first half but Sean O’Brien was to the fore in finding space and making important line-breaks in the second period before he made way for Josh van der Flier with 15 minutes to go.
Every game he plays is sharpening O’Brien further still in his return to top form as he looks ahead to the rest of the championship.
You also hope Conor Murray will not play as poorly again for quite some time. By his own high standards, he was out of the game on Saturday and he has plenty of motivation to make amends next week.
Which brings us to that very next challenge: if we thought Scotland viewed us as ripe for the picking, then you can be sure Italy will think the very same.
There would be no prouder man than their new coach Conor O’Shea if they took Ireland’s scalp. He’s as sharp a mind as there is in the Six Nations and it’s going to be fascination to see what kind of game plan he brings to the Irish challenge next weekend.
He said ahead of last Sunday’s game against Wales that he wanted to build a team which could consistently last longer than 50 minutes against top-quality opposition. That was about all they managed against the Welsh. There’s plenty of room to improve against Ireland.
So Ireland start with a defeat, hardly softened by the single bonus point, but that very point could yet prove crucial when the final rankings are decided.
There’s plenty still to fight for between now and the middle of March.