Finn turns his focus to Japan

FINN Lynch is eight years old and he’s sitting quietly at the back of a group of teenagers, but it’s no ordinary group. They’re some of Ireland’s most talented young sailors; a group which includes Finn’s then 14-year-old brother Ben among its number. 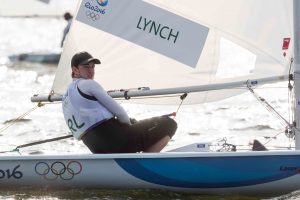 The coach is firing out questions and the kid at the back is thinking to himself, “I know the answer to this one… and that one”.
Maybe it’s no surprise, by that stage Finn has spent a couple of years stealing the notes left around the house by Ben and his other brother Rory, both excellent young sailors, both frequently representing Ireland and winning national regattas. 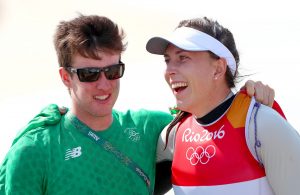 Finn Lynch celebrates with Annalise Murphy after she won the silver medal in the Laser Radial race Photo: Inpho/James Crombie

“I’d rewrite them into my own copy book before I could even sail. Then I used to learn all their notes.”
Fast forward 12 years to the summer of 2016 and perhaps it’s no surprise that with this kind of initiative, it’s the little eight-year-old kid who has grown up to be Ireland’s youngest ever helm of an Olympic boat at the Rio Games.
They say all great sporting journeys start young and it has been no different for the Bennekerry man who is still a month shy of his 21st birthday. 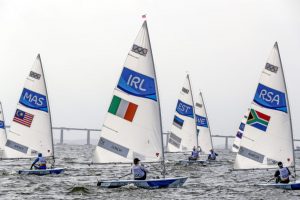 Finn Lynch with the Irish flag on the sail in Rio

His path to last year’s Olympics was sprinkled with gold. By the age of 12 he was following his older brothers’ example by representing Ireland, by 13 he was a world silver medallist in the Topper boat.
By 2012 he was a world youth silver medallist. The following year he was a world champion in the Laser Radial boat at U21 level. He was only 17-year-old – four years ahead of the curve.
His primary goal was always to make the grade for the Tokyo Olympics in 2020 so perhaps it shouldn’t have been a surprise that he also reached that goal four years ahead of schedule by qualifying for last year’s Olympic Games. After a memorable and challenging week he came home in 32nd place against a top-quality field.
“It was my dream for as long as I could remember and you have this idea of it being just the most amazing two weeks of your life,” says Finn, on a brief trip home to Carlow from his training base in Croatia last week.
“But the sailing was an hour and a half away from the Olympic village so I was in a normal apartment with two other sailors from the Irish team. It was pretty much a normal regatta except for the fact I had the big Irish flag on my sail and we had security guys checking us on the way in.
“Then every day when we came in from sailing we had to go through a media zone with RTÉ, so that was the big difference.”
The primary goal for Finn was that the Rio Games should act as a learning experience for Tokyo and beyond. It certainly lived up to expectations. The opening ceremony was a massive highlight and the memory of walking into the Maracana Stadium with the Irish team haven’t faded.
At one point his phone rang and his mother Grainne was on the other end of the line.
“She called me and said, ‘I’m up here on the left’ and I was like ‘I see you!’ She was like ‘No way!’ She said she was waving. I didn’t see her though,” laughs Finn. “That was a really cool moment though.”
Whether it was taking a selfie with Jamaican sprinter Asafa Powell, or catching a glimpse of British tennis star Andy Murray, there was no doubting the magnitude of the occasion.
He didn’t quite realise it at the time, but it took a physical toll too.
“I think it reflected in my results,” he says, with the benefit of hindsight. “First the three days I was top 25 which would have been a great result. I was 21st after the first day. Then during the rest day I got sick. I got a flu out of nowhere. Maybe there was so much energy expended with the theatrics, even though I knew the theatrics would be there. I wasn’t prepared enough for it not to affect me which, looking back, is fair enough. You’d need to be a bit of a robot for it not to affect you.
“Then the last three days…” Finn just whistles and shoots his arm down towards the ground. “Physical and mental tiredness. It was disappointing at the end. I was really unhappy with the result [32nd overall] because as a team we were so well prepared.
“It absolutely stings but I’ve definitely moved on. I’ve made some big improvements in my speed throughout the winter.”

The team he’s talking about is the Croatia-based training group Finn has been part of for the past 18 months. The head coach is local man Jozo Jakelic, whom Finn calls “the guru” of the Laser boat in which he competes.
Also included in the training group are Croat Tonci Stipanovic, who won silver in Rio, and Cypriot Pavlos Kontides who won silver in London in 2012 and finished seventh in Rio.
Finn says there is no better place for him to be at this stage of his career and already, everything is geared towards Tokyo.
“There’s the British, the New Zealanders and the Australian guys who all have really good national teams but we’re by far the best international group coming together,” says Finn. “This is the team to be on in Europe right now.”
The newest recruits to the team are a couple of Japanese sailors who will benefit from working with high-quality training partners while, hopefully, giving Finn and his colleagues the inside track on how best to navigate the Tokyo swells.
There’s a confidence that comes with knowing you’re working with the best in the world in your chosen sport.
“I train with Tonci day in, day out, doing everything the same. So I know what needs to be done. I know what I’m doing is what the best guys in the world are doing. Tonji and Pavlos are third and fourth ranked in the world now, and they have been for a number of years. If I can pickpocket things from both of them and put it all together…”
Just as important as working with the best is challenging yourself to be the best you can be. The easy way out can’t be an option.
“I’ve worked a lot with a sports psychologist called Stephen McIvor and we decided that the only way to do it was to break down every little situation on the water. Every little question I have, I need an answer to. There are no unanswered questions. It’s the same with every piece of gym training; if I’m sceptical about something or if I don’t understand it, I need to be 100 per cent on top of all aspects of my sport.
“You can hide on the water and not give 100 per cent. But that can’t happen in training. If you’ve got Olympics medallists beside you and you’re not giving 100 percent, they’re not going to be beside you anymore, they’re going to be ahead of you. So you put in the work, day in, day out.”
It all comes back to that eight-year-old Finn with a thirst for knowledge.
“I have a copy book full of situations in training just since the Olympics. I’m really a nerd, that’s what it takes. Be a complete nerd about your sport and have an attitude in training that’s 100 percent.
“Even stupid things, my coach will say, ‘Finn this isn’t important’. I’ll say, ‘OK, it may not be important but tell me the answer.’”

It’s still over three years to the Tokyo Games but the focus has very much shifted in that direction. As much as the European championships, world cup events and world championships are important, for Laser sailors, the Olympic regatta is the big one.
The head of Irish sailing has already travelled out to Japan to check the venue. The world championships in 2018 also act as the Olympic trials. Finn, or another Irish sailor, needs to finish in the top 30 to qualify an Irish boat for Tokyo. That’s only step one, Finn will still have to win his national trials which will take place in early 2020 to actually take the boat to the Far East.
Before then, this year’s world championships are the primary focus. Fittingly for Finn, they’re being hosted by his club in Croatia which offers him the obvious advantage of knowing the conditions.
“The worlds also act as our ‘funding regatta’ so if I finish top 40 in the worlds then I maintain the funding level I’m on now which is the international level [€12,000]. But if I finish in the top eight nations then I get on to world class funding from Sport Ireland.”
As welcome as that would be, sailing is a very expensive sport to compete in at the top level and he says that money is always an issue. Ahead of the Rio Games his Irish club, Dun Laoghaire Yacht Club, managed to raise enough to keep Finn’s dream afloat thanks to some generous private contributions. But he knows he can’t keep going to the same well.
“We will be looking to form some partnerships. This is definitely a plug!” he smiles. “But I think I have a good From ‘Carlow to the World’ kind of image for any company to get behind.”

Rio will always be a big part of his story. Watching his good friend Annalise Murphy finally step onto the podium for accept her silver medal was a big highlight. When he wasn’t on the water himself, Finn was cheering her on from the shore. It’s the perfect motivation for him to keep working hard in the knowledge that the rewards will come.
“I have such an amazing opportunity now,” he says. “I shouldn’t be gunning to just qualify. The goal is to be in with a chance of a medal when it comes down to it. My coach has got the silver in the last two Olympics. Australia has got the gold. His [team] goal in the next Games is to get three medals, not one medal. So hopefully I can help him out with that.”

Finn Lynch’s next event is the World Cup series in France on 23-30 April. Keep up to date with his progress at Finn Lynch Sailing on facebook.