Broderick on fire as Carlow secure the points

CARLOW’S love-hate relationship with National Football League Division Four continued on Saturday night in Netwatch Cullen Park. After two frustrating defeats they produced their most effective performance of the competition so far, outclassing their Waterford rivals. 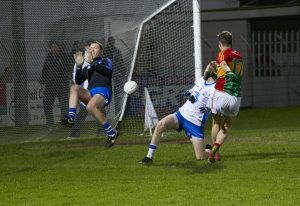 It could be argued that the highlight so far this season was their away draw to Westmeath. Perhaps, but this time they scored goals at crucial times, played a pleasing brand of football and long before the end the small clutch of supporters who refused to turn their backs on the county senior team were able to sit back and enjoy this victory.
A peach of a goal as early as the fifth minute got Carlow on their way. There wasn’t a lot on when Brendan Murphy took possession in the middle of the field. He cantered forward and with a beautifully weighted foot-pass he allowed Sean Gannon to hone in on goal. With the cover drawn, Paul Broderick lost his marker. Again the pass was inch perfect and corner-forward found the net with ease. 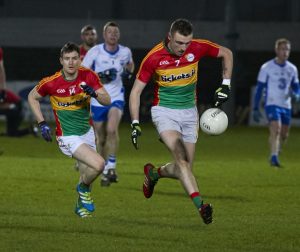 “It is always a tough game against Waterford but we were disappointed with the way we performed against Leitrim in our last game, especially in the first half.
“We had it clear in our minds, get a fast start and get the win,” explained Carlow captain Darragh Foley after the game. 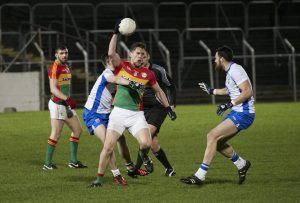 Carlow’s Brendan Murphy on the attack

Waterford hit back with a point from Donie Breathnach while respective midfielders Sean Murphy and Tommy Prendergast swopped scores from play. The visitors, with the aid of the wind, were guilty of some errant shooting and by the break they had registered eight wides. Sean Murphy played a roving role between backs and forwards. When in possession he sprinted forward and frequently got in behind the Waterford cover. It was his run which drew a free which Broderick converted. That proved to be a huge psychological boost for the eventual winners. By half-time, Broderick had registered 1-2 of Carlow’s total as the home side led 1-5 to 0-5.
“We were trying to create spaces for Broderick who was on fire tonight. Sometimes you have days where it doesn’t come off but today it did,” noted Foley. 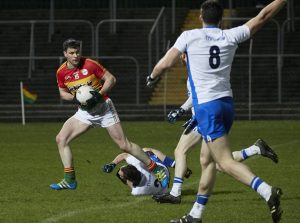 Inconsistency has dogged this Carlow team over the last few years. They had gone into this game short a few key players so with only a three-point lead the game was finally balanced. The Carlow captain was keen to emphasise that players who came in were entrusted with a job and did it.
“Daniel St Ledger is injured, Kieran Nolan is out sick. They are big losses but the lads who came in were brilliant and stepped up to the plate. It is great to have a good squad and that will cause (selection) headaches next weekend,” the captain predicted.
Within minutes of the restart Broderick found the net once more. The goal was a carbon copy of his first with Gannon and Brendan Murphy involved. From a Carlow point of view it was good to see three experienced men taking on the mantle of leadership and doing so effectively.
After the second goal, Foley landed a free. Danny Moran found the posts from the left. Broderick scored his first point from play. The game was well and truly up for Waterford. It wasn’t until the 65th minute that they scored their first point of the second half. Carlow hunted them down relentlessly while at the other end, Ciaran Moran was denied by the acrobatics of keeper Stephen Enright.
“We want to back it up against Wicklow (next Sunday). We were a bit unlucky against London and Leitrim. Those results let us down so we want to finish the league as strongly as possible,” said a motivated Foley at the finish who will be hoping to put back-to-back wins together in Aughrim.
Carlow: Robbie Molloy; Chris Crowley, Mark Rennick, Graham Power; Danny Moran (0-1), Shane Redmond, Gary Kelly; Brendan Murphy, Sean Murphy (0-1); Alan Kelly, Darragh Foley (0-2 0-1 free), Sean Gannon; Paul Broderick (2-6 0-3 frees 45), Ciaran Moran, John Murphy. Subs: Shane Clarke for Power (53 mins), Shane O’Neill for J Murphy (55 mins), Conor Lawlor for B Murphy (black card 59 mins), Brian Cawley for D Moran (65 mins), Jamie Clarke for Foley (69 mins).
Waterford: Stephen Enright; Stephen Dalton, Thomas O’Gorman, Kenny Murphy; James McGrath, Kieran Murphy, Ray O Ceallaigh; Tommy Prendergast (0-1), Michael Curry; Caoimhin Maguire, Paul Whyte (0-3, 0-2 frees), Conor Murray; Donie Breathnach (0-3, 0-2 frees), Joey Veale, Fergal O Cuirrin. Subs: Michael O’Halloran for Maguire (h/t), Aidan Trihy for Murphy (46 mins), Jason Curry for Curry (50 mins black card), Dylan Guiry for Murray (57 mins).
Referee: Patrick Maguire (Longford).