CARLOW put a season of frustration behind them when their senior hurlers marched to Croke Park on Saturday and put Antrim to the sword in spectacular fashion to win the Christy Ring Cup by 5-23 to 4-15. 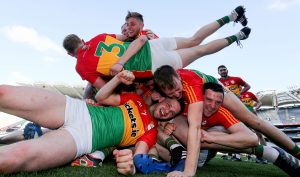 While this was a massive team effort, the headlines belonged to James Doyle who scored three first-half goals and finished the day with a haul of 4-1. His fellow clubman Marty Kavanagh, who captained the team to this magnificent victory in his first ever appearance at Croke Park, hit 1-2.

It was a scoring burst of 3-6 in a 13-minute spell before the break which all but decided the game as Carlow went in leading 3-12 to 1-7 at the interval.

In the second half Antrim came back at the eventual winners but were unable to claw back the lead. Even so Colm Bonnar never relaxed until close to the finish.

“We kept on the front foot. We kept pushing. That is what we asked the lads to do at half-time,” said the Carlow manager.

He said there was never a danger of complacency setting in.

“It is no problem keeping our feet on the ground. We have been five or six points up on Antrim before and they just kept coming back.

“In hurling, six or seven points is nothing. It is very achievable. You score a goal and I was anxious. In the league and championship, we have allowed teams to come back at us early in the second half.”

This time there was no reprieve for Antrim. Second-half goals from Kavanagh and Doyle sealed victory as Carlow added 2-11 to their first half total. Bonnar said this was a victory for an entire squad.

“We have a very strong panel. We had to make strong calls. There were six or seven lads who were hugely disappointed they were not in there as Carlow hurling and this group of players love their hurling. They cannot get enough of it.”