Hurlers secure a win for the ages

IN the build up to Saturday’s Christy Ring Cup final, Carlow senior hurling captain Marty Kavanagh commented on these pages that if Carlow had beaten Dublin in the football, they might as well have folded up the hurling team altogether. 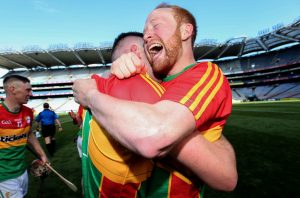 It may have been said in jest – and there was certainly plenty of hype surrounding that football championship game in Portlaoise last week – but the hurlers reminded everyone that they have been carrying the county colours with distinction all season too.

In Croke Park on a glorious afternoon, they followed in the footsteps of recent All-Ireland wins by both the Carlow and Myshall camogie teams to claim a brilliant Christy Ring Cup victory. 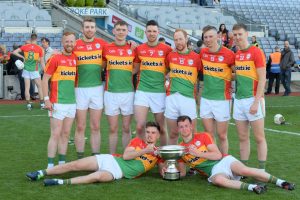 In the context of recent games between Carlow and Antrim – one draw and two defeats to the northerners in 2017 – a win of this magnitude was a bolt from the blue, but for those who made the trip to headquarters, it was clear which team had the required pace and invention to blow the game wide open.

All around the pitch, players raised their game to befit the occasion. From the start full-back Paul Doyle was out in front and driving the team forward, the half-back line was immense and the midfield of Jack Kavanagh and Diarmuid Byrne showed a willingness to battle for every dirty ball that came their way. 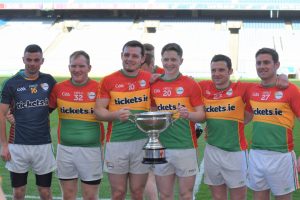 The Naomh Eoin members of the panel with the cup Photo: Eddie Byrne

Denis Murphy was imperious from placed balls, scoring 10 frees, while the entire forward line routinely beat their men in the race for possession.

That’s not to mention the four-goal contribution of James Doyle.

Afterwards, the St Mullins man was the most modest man in the stadium and preferred to deflect attention to those around him.

“The boys put it on a plate for me,” he said. “I would have been gutted if I had missed them. Thankfully I got them, but the boys were outstanding.”

His first two goals were all about moving into space perfectly and shooting with power and precision. The third of his four-goal salute was a strike which might not be bettered at Croke Park this season. Picking up the ball in front of his man, he absolutely burned him for pace around the outside and rattled it into the net from an angle.

When asked after the game what the difference was between this performance and other games against Antrim this season, centre back David English replied quick as a shot: “James Doyle!”

The Ballinkillen man said they fed the forwards a hearty meal of possession and the boys up front did the damage.

“We put a huge amount of ball into the full forward line and James was like a lightning bolt going around,” said David. “Edward Byrne and Mouse too, everything finally gelled today. We’ve been waiting for a big performance and thankfully it came today.”

There was also a certain amount of satisfaction that the work that has been done on the training pitch under Colm Bonnar got its reward.

“Since the Wicklow game we went at it hard,” English said. “We training like it was a brand new year. We did the running and we did the tough man-for-man games and that paid off today. You could see every Carlow man today got the better of their opposition.”

The beauty of this year’s competition structures means there is a nice bonus for the Christy Ring Cup winners, a route into this year’s All-Ireland qualifiers where Carlow will play Laois on Saturday or Sunday week.

“To be honest, I’d say a lot of the team didn’t even think about any other game. We were absolutely fixated on this and we have been since the start of the year,” said English. “We wanted to be here in Croke Park and we wanted to earn the right to go up to Liam MacCarthy next year and thankfully everyone did the business today.”

County board chairman Sean Campion was effusive in his praise for the group who had brought another national title to Carlow.

“For hurling in the county and for the GAA in the county, it’s massive,” he said. “We came in as underdogs and I think we proved to everyone that we can produce the goods.

“It’s huge for Carlow. It’s been a great couple of weeks. We’re heading towards the end of June now with the two teams still in championship and it’s a while since that happened.”

He said the big occasion on the biggest stage didn’t faze the players.

“They didn’t shirk it. We’ve been expecting James Doyle to explode. We knew if he got the right ball be could do it. To a man, the whole panel of 32 have worked so hard since last November and I couldn’t be prouder of them and the management.”