THE Lions’ first test ended with disappointment in Auckland on Saturday morning as New Zealand strangled the life out of the tourists in the second half, continuing an unbeaten run at Eden Park which stretches back 23 years. 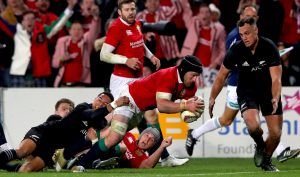 Sean O’Brien crosses to score one of the finest tries ever scored by a Lions team in Auckland Photo: Inpho/James Crombie

On Saturday’s evidence, the Lions are going to find it incredibly difficult to turn it around in the second test in Wellington this coming weekend. And yet there was much to admire in what the visiting team did, especially in the first half.

They pushed and probed, created a few big chances and defended well, for the most part. Central to their efforts was Sean O’Brien. His reputation preceded him on this tour and it’s fair to say that once the team for the first test was selected, O’Brien was identified as one of the Lions’ key assets. But try as they might, the All-Blacks couldn’t keep him quiet. 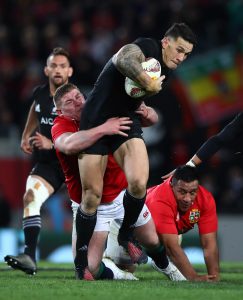 Tadhg Furlong gets to grips with Sonny Bill Williams of New Zealand during the first test Photo: Hannah Peters/Getty

In front of a massive crowd, the majority of whom were baying for Lions blood, he excelled. He put in a mammoth shift, especially at the breakdown. Put yourself in his position, charging in to try to pinch a ball before 240-odd pounds of New Zealand beef crashes into your shoulders. He did it time and time again and he never took a backward step. He tackled like a demon and, of course, he was on hand to finish off one of the finest tries ever scored by a Lions team.

The move was inspired by Liam Williams. But it was O’Brien, the only forward to keep pace with the flying Lions backs down the length of the field, who took it across the line.

The half-time analysis of O’Brien’s try on New Zealand television gave some indication of his reputation in the southern hemisphere.

Former All-Black Scott Robinson was talking through the play, and as the final pass was made to the Tullow Tank, he said “and look who’s there… The Man. How hard is he!”

He didn’t even have to say his name. ‘The Man’ will do.

It’s toughness that the Lions as a team were lacking at vital times though, as well as an inability to finish off the opportunities that were created. So in the end, we’re left with the what-ifs.

What if Conor Murray had finished off that early try-scoring opportunity, denied by a last-gasp Aaron Smith tackle?

What if Elliot Daly, after taking a lovely high ball, had connected with his pass inside for what would have been a certain try?

What if the Lions had made the best of their dominance in the opening minutes of the second half when a converted try would have put them ahead?

Having said all that, the All Blacks aren’t a bad team, are they? What about the manner in which Codie Taylor took that pass off his toes to race in for the opening try, and he’s a hooker. Beauden Barrett’s beautiful scoop to recover a ball with Conor Murray breathing down his neck in the first half was pure class.

And for every experienced player the Lions were able to spring from the bench, New Zealand were able to match them with seasoned campaigners of their own like Wyatt Crockett and Charlie Faumuina to close out the game.

How can the Lions recover? Warren Gatland has already been pretty pointed in where he thinks his team fell down.

“We need to be much more physical next week,” he said after the game. In other words, win the fight before you can even think about winning the game.

Beyond O’Brien, what of the other Irish performances? Peter O’Mahony may find his position under threat with Gatland likely to bring his tour captain Sam Warburton back into the team. Conor Murray won’t be dislodged and neither will Tadhg Furlong.

Tadhg joins O’Brien as a representative of what you might call junior rugby country in Ireland. We all know O’Brien loves nothing better than getting home to the farm to feed the bullocks. Furlong, for his part, has the look of a fella who has just stepped down off a tractor after ploughing five acres. If it’s toughness Gatland wants, the Wexford prop will pack down once again on Saturday morning.

It’s also unlikely Johnny Sexton will get the nod ahead of Owen Farrell and it’s likely Ben Te’o, who had an excellent game in the centre, will also retain his place so Farrell won’t be shifted out there to make room for Sexton either.

The general consensus is that the series is a done deal, that New Zealand will finish it off 3-0. But there’s some pride left in the Lions yet. Marry some of that with a little tactical know-how and they might just take it to the final weekend.