CLLR Anne Ahern has this week announced her decision to resign from Carlow County Council, bringing her political career to an end after 13 years. The Fianna Fáil councillor cited the workload attached to her new role as principal of St Mary’s Academy CBS Carlow as the reason for her decision.

“I’m really sorry that I have to step down, but I knew it was a decision I’d have to face when I applied for the position of principal,” she told The Nationalist.

“The workload of both a principal and a councillor is huge and very demanding and I don’t feel that by remaining in both roles I would be doing either role justice. It would be unfair to the people of Carlow, the people I represent, if I wasn’t giving 100%, which I have always given,” she stated. 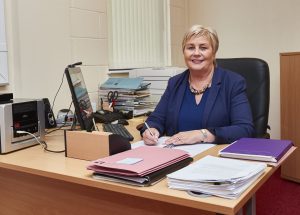 “It would have been a huge challenge to keep both things going,” Anne admitted. “It is a difficult decision, but being in a place of responsibility is all about making hard decisions.”

A political pact between Fianna Fáil and Sinn Féin for the position of mayor on Carlow Municipal District is currently in existence and cllr Ahern was expected to become the town’s first citizen in 2017-18. Her decision to resign means that cllr Ahern will not have the honour of becoming Carlow’s mayor.

“As long as I’ve been on the council, I’ve never had the opportunity to be mayor or chairperson … so yes, that is a huge disappointment, an opportunity missed,” she said.

Cllr Ahern stated that she thoroughly enjoyed her time on the council, in particular working with voluntary, community and residents’ groups and “any organisation that had Carlow at its heart”.

She reflected that her “greatest disappointment was the demise of Carlow Town Council”, a successful structure she described as being “obliterated by Phil Hogan”.

“Carlow town has suffered hugely as a result,” she said.

In the past few months, cllr Ahern discussed her decision to resign with her family, her husband Pat and their children Pauric, Kate and Roisin, her wider family and party colleagues. “Some have been a little bit shocked and surprised and encouraged me to continue both roles, but I knew that the 584 students and 50 teaching and support staff at the school deserved my full focus and commitment,” she said.

Cllr Ahern’s resignation means that Carlow County Council now has no female representative. The decision on who will be co-opted onto her vacated seat is a matter for the Fianna Fáil party in Carlow.