The Nationalist sports editor John Foley formally presented the new cup for the Carlow senior football championship to Carlow GAA at their recent county board meeting. 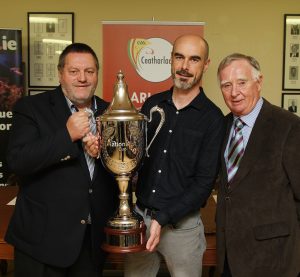 The Nationalist Cup will replace the Conlon Cup which was also sponsored by the newspaper and has been in circulation since 1984.

John Foley told the meeting The Nationalist was “very proud of its association” with Carlow GAA.

“Hopefully the cup will be travelling all around the county over the coming years,” he said, noting that Éire Óg captain Sean Gannnon or Rathvily captain Ed Finnegan will have the honour of hoisting the cup above their heads for the very first time.

The Nationalist Cup will become only the fourth cup to be presented to the winners of the Carlow senior football championship.

The Haughney Cup, which was the first cup used, was last won by Ballymurphy in 1953. The team was captained by Martin Lennon. The Fr Lawlor Cup was introduced in 1954. The late Paddy Carpenter was captain of O’Hanrahan’s and the first man to raise that cup. The last winners of the Fr Lawlor Cup were Rathvilly in 1983 when Mayo native Vincent McGrath lifted the silverware.

This was Rathvilly’s first ever senior title and, interestiingly in the context of next Sunday’s decider, they beat Éire Óg in the final.

The Conlon Cup was introduced for the 1984 championship and Éire Óg reversed the previous year’s result, defeating Rathvilly in the final. The last winners of the Conlon Cup were, of course, Palatine with Jason Kane lifting the cup for his team in Netwatch Cullen Park last October. O’Hanrahan’s hold the record of being the only team to have won all three previous cups.