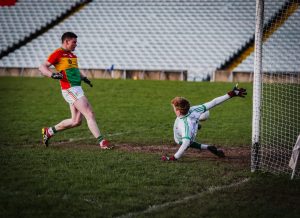 Carlow captain John Murphy tucks away the rebound from his own penalty at the Gaelic Grounds, Limerick

National Football League Division 4
Carlow 2-11
Limerick 0-13
By John Foley
CARLOW’S drive for promotion from Division 4 of the national football league continues after a well-deserved four-point win over Limerick in the Gaelic Grounds on Sunday.
Two wins on the trot away from home means Turlough O’Brien’s men can now look forward to the visit of Leitrim to Netwatch Cullen Park on Saturday for the first home game of the campaign with a full quota of points on the board.
A goal by John Murphy, when he tucked away a rebound from his own penalty, sandwiched by points from Paul Broderick and Brendan Murphy around the 48-minute mark pretty much ended the game as a serious contest. Those scores opened up a 2-10 to 0-8 lead and even though Limerick upped the tempo from then to the final whistle, Carlow were always able to keep the hosts at arm’s length to seal a deserved win.
The game was hallmarked by a patient Carlow performance throughout. As Limerick dropped in numbers when not in possession, Carlow consistently built slowly from the back, never rushed into passes and held possession above all else.
The occasional injection of pace from the likes of Sean Gannon and Sean Murphy or forward runs from Daniel St Ledger and Conor Lawlor in the second half in particular, proved effective in breaking down the Limerick defence as they opened up sufficient scoring opportunities.
The game was also defined by kick-out strategies, or more accurately how Carlow’s worked while Limerick’s too frequently malfunctioned.
With Carlow pushing up high on the kick-outs of Limerick’s goalkeeper Donal O’Sullivan from the start, they were able to disrupt the home team’s ability to gain possession while forcing turnovers in attacking areas of the pitch.
On the other hand, when Limerick also pushed high, Robbie Molloy was able to find his club-mate Brendan Murphy around the middle with good accuracy and the Rathvilly man consistently won clean ball, earned frees or released the ball to support.
It was this as much as anything which meant Carlow’s enjoyed the lion’s share of possession throughout.
The opening exchanges were tight with Limerick’s Danny Neville and Paul Broderick from a free sharing the first scores of the game.
Limerick’s Jamie Lee then lofted a free for his team’s second point, which went over off the outstretched hands of the Carlow defence underneath the crossbar.
Then came the game’s first decisive moment on 11 minutes when Paul Broderick swung in a free from wide on the right-hand side of the pitch. He didn’t get the desired height but the ball few through a thicket of hands, possibly getting a touch from Eoghan Ruth on the way, as it nestled into the top corner of the Limerick net. Another Broderick free made it 1-2 to 0-2 after 13 minutes.
Carlow were creating far more shooting opportunities in the first quarter but they were guilty of wayward shooting too as they registered five wides before the 16th minute of the game. However, it was a trend they arrested and they registered only two more for the rest of the game. Limerick’s Danny Neville and Jim Liston both shot scores from play before the attacking Daniel St Ledger played a neat one-two with Darragh Foley and pointed for Carlow.
Carlow had another big goal chance but Eoghan Ruth saw his effort saved point blank by O’Sullivan in the Limerick goal
However the visitors hit a purple patch in the final 10 minutes before the interval with frees from Broderick, and Darragh Foley (2) added to by the score of the day by Ciraan Moran who jinked inside his marker and stroked over a beauty with the outside of the boot from the left wing.
By half-time Carlow were 1-7 to 0-6 to the good.
The home side just about stayed in touch for the opening period of the second half as Jamie Lee and Broderick traded points but that flurry of Carlow scores, including the second goal after the awarding of the penalty, turned the game decidedly in Carlow’s direction.
By the time Sean Murphy lofted a point after intelligent recycling of the ball on 53 minutes, Carlow were 2-11 to 0-9 ahead.
Players and management accepted after the game that they allowed the home team to gain a foothold in the last 15 minutes or so and, indeed, Limerick reeled off four points on the trot between then and the end of the game. But the points were never arriving at anything like the frequency required to cause Carlow serious jitters.
The Carlow goal remained unbothered throughout, even in the closing quarter when the introduction of the towering Padraig Scanlon on the edge of the Carlow square was designed to offer an aerial option.
This was workmanlike from Carlow, with enough to suggest they have what it takes to sustain that much coveted challenge for promotion.
Carlow: Robbie Molloy; Shane Redmond, Conor Lawlor, Danny Moran; Jordan Morrissey, Daniel St Ledger (0-1), Ciaran Moran (0-1); Brendan Murphy (0-1), Sean Murphy (0-1); Sean Gannon, Darragh Foley (0-1, free), Eoghan Ruth; Paul Broderick (1-5, frees), Darragh O’Brien (0-1), John Murphy (1-0). Subs: Benny Kavanagh for D Moran (61 mins), Diarmuid Walshe for B Murphy (61 mins), Kieran Nolan for C Moran (69 mins), Conor Crowley for D O’Brien (72 mins)
Limerick: Donal O’Sullivan; Garrett Noonan (0-1), Sean O’Dea (0-1), Brian Fanning; Daniel Day, Paul White, Jim Liston (0-1); Darragh Tracey (0-1), David Ward; David Connolly, Cillian Fahey, Tony McCarthy; Peter Nash (0-1), Danny Neville (0-2), Jamie Lee (0-4, 0-2 frees). Subs: Padraig De Brun for P Nash (43 mins), Seamus O’Carroll (0-1) for T McCarthy (52 mins), Padraig Scanlon (0-1) for D Ward (52 mins), Tommy Griffin for P White (61 mins), Robbie Bourke for J Lee (61 mins), Colm McSweeney ford Day (68 mins)
Referee: John Gilmartin (Sligo)