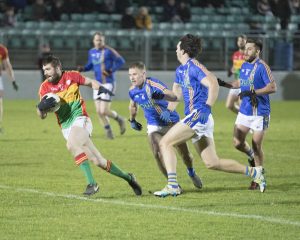 Carlow reap what they sow at the Garden’s expense

National Football League Division 4
Carlow 1-17
Wicklow 0-12
By John Foley
FOR DECADES this rivalry has produced many fine clashes through national leagues and the occasional championship meeting with each side giving as good as they got. But on Saturday evening’s evidence the hosts have moved far ahead of what Wicklow are capable of as Carlow turned in a far from flawless but, nonetheless, assured performance to secure a commanding eight-point win at Netwatch Cullen Park.
The win means Carlow have their fate entirely in their own hands. A win against Antrim at Corrigan Park, Belfast on Sunday will guarantee promotion to Division 3 and a place in the Division 4 final, regardless of what happens in the last game against Laois on Sunday week. They couldn’t have asked for more.
Turlough O’Brien’s men played with a better-developed game plan, used their physicality to their advantage and kept their discipline throughout as they closed out their fifth national league win in succession of this campaign. Their movement fashioned some fine scores from play, perhaps none better than a brace of classy strikes from Paul Broderick at the end of the third quarter.
Meanwhile, the visitors struggled to find their chief scoring threats, Seanie Furlong and James Stafford who formed a twin-pronged attack, with any degree of regularity. Too often their movement up the pitch was laboured and the Carlow defence tackled well and covered the runners with relative ease.
Carlow went into the game as favourites and they lived up to the billing although the opening exchanges were tight.
Jordan Morrissey raided up the wing to loft over his team’s first point with an assured strike and soon after Darragh Foley made it two after a rare long ball into the Carlow full forward line.
Wicklow goalkeeper Mark Jackson got his team off the mark with a 45. Indeed the Baltinglass man was to finish Wicklow’s top scorer as he went on to contribute four more frees during the game.
The fact that Wicklow relied so much on his contribution – Darren Hayden also scored three frees – says much about where the visitors’ real problems lie.
It was tit-for-tat in the opening quarter with a Brendan Murphy rasper over the bar and a lovely point from James Stafford for Wicklow the pick of the scores as Carlow took a 0-5 to 0-4 lead after 20 minutes.
But in the space of 30 seconds Carlow gained a serious grip on the game. First the lively Sean Murphy kicked a point. Then from the next kickout, Mark Jackson’s attempt to go short to his full back Jamie Snell was loose and the Carlow attack pounced on the mistake like hungry wolves. Quick passes from Darragh Foley and Darragh O’Brien released Paul Broderick who blasted the ball into an empty net.
Two minutes later Broderick clipped over another free and suddenly Carlow were 1-7 to 0-4 ahead. It was all uphill from there for Wicklow.
A Darren Hayden point from play and a couple of Jackson frees stemmed the tide but then came a move which has become something of a Carlow trademark this season. They played a series of more than 20 passes, many of them in their own half, including a 20-yard pass back behind their own 45-metre line, tempting Wicklow on to them before driving forward into the space left behind for Darragh Foley to score.
At the half time whistle, Carlow were 1-8 to 0-7 ahead.
Wicklow needed a big third quarter if they were going to make a game of it but John Evans’s men never hit their stride.
Indeed, in that quarter Carlow outscored the visitors by five points to two. A lovely point by Sean Gannon who won the ball out in front of his man before turning to clip the ball over the bar was as simple as it was effective. Another highlight was Ciaran Moran’s relentless run through the Wicklow defence which drew a free. Darragh Foley made it count on the scoreboard.
That’s not to say Wicklow gave up the ghost. Ross O’Brien scored a good point off his left. But when John McGrath was shown a black card for wrestling a player to the ground, the visitors’ attacking threat was further blunted.
After a couple of early misses, Paul Broderick was now effortlessly finding the target from frees and by the 15th minute of the second half Carlow were 1-13 to 0-9 ahead.
Then came the final nail in Wicklow’s hopes of getting something from the game. Brendan Murphy drove through the Wicklow defence where he was felled by centre back Dean Healy.
Referee Eamon O’Grady deemed it to be a kick rather than a trip and the Wicklow man was shown a straight red card.
Daniel St Ledger’s resultant free, a boomer from about 45 metres, made it an eight-point game – 1-14 to 0-9 – with 15 minutes to go and that was effectively that.
Two beautiful Broderick points followed: the first after jinking inside his man and the second after a flowing move involving Brendan Murphy and Darragh Foley. Sean Murphy finished the scoring for the home side. Wicklow’s remaining scores? All from frees.
The road from Carlow to Belfast will be well worn next Sunday. Bring it on.