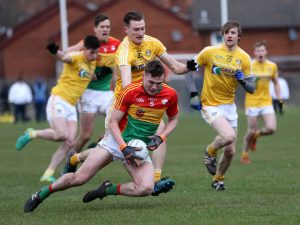 Carlow clinch promotion as they make it six from six

National Football League Division 4
Carlow 1-12
Antrim 0-12
By Kieran Murphy
REMEMBER the date. Remember the venue. March 18 2018. Corrigan Park.
The home of St John’s GAA on the Whiterock Road in West Belfast sits proudly on a hill between the Ballymurphy Road and Falls Road areas.
It was here on Sunday Turlough O’Brien’s charges put the final part of the National Football League Division 4 jigsaw promotion surge into place when making it six wins out of six. Irrespective of what happens when Laois come to Netwatch Cullen Park on Sunday, Carlow are going up.
The Barrowsiders can also look forward to a league decider, hopefully in Croke Park on the weekend of April 7/8.
That won’t be decided by those on the Croke Park fixtures committee until later. The northerners have two more games to get it right but Carlow won’t mind who they play in the divisional final. Bring it on. Laois or Antrim.
And the beauty is that no-one can say they didn’t deserve it. They also did it the hard way. Four wins on the road makes their achievement all the sweeter. The pressure is off now and the players will surely remember this St Patrick’s weekend for the rest of their lives.
In their own inimitable style they started this game just as they have started many of their previous challenges. As soon as one player gets his hands on the ball others move in different directions, attacking space and making themselves available for the pass. This careful and planned approach sucks the energy out of the opposition.
Three times in the opening eight minutes Paul Broderick knocked over points from placed balls when Antrim frustration drew frees. Conor Murray replied for the home side who themselves enjoyed a purple patch when drawing level with two frees from CJ McGourty.
The visitors never trailed over the 70-odd minutes. For 10 minutes of the half they had to work hard to re-impose themselves. They were successful in this when Broderick landed two more frees and Darragh Foley finally got Carlow off the mark from play after just under a half an hour. The strong wind blew across the pitch from the city end of the ground but significantly it favoured Carlow ever so slightly in the second half. In terms of morale and confidence their 0-6 to 0-4 interval lead was huge.
Even more so when Eoghan Ruth flighted over another point within a minute of the restart. The cheer from the Carlow supporters just behind him spoke volumes as to how they were feeling. They dared to believe.
McGourty replied for Antrim but again Carlow hit back with further points from Foley and Broderick to put the visitors four points ahead. Substitute Kristan Healy knocked over a good point for the Saffrons who were hanging on at this stage. Another dead ball effort brought it back to a two-point game.
Up to this, a number of tackles from either side were punished with yellow cards. Stephen Beatty, who had replaced the black carded Kevin O’Boyle, then clashed with the onrushing Jordan Morrissey. Another yellow surely? Not this time. The substitute saw a straight red and Antrim’s hopes of victory took a massive blow.
With 10 minutes remaining, Paul Broderick stood over a difficult free out on the right side and into the wind. He struck his effort well. His attempt looked as if it was going over the bar but the ball dipped viciously and came back off the crossbar. It looked to be dropping over the goal line and all Chris Kerr, the Antrim keeper, could do was claw it away. He couldn’t get any force on his save and Darragh Foley hammered the loose ball home. This might not be the most spectacular goal the Kilbride man has ever scored, but it will live long in his memory.
Playing against 14 players with a five-point lead, this was now Carlow’s to lose. They still had to withstand a late revival from Antrim who dug deep in the final minutes. Four minutes of injury time seemed to go on for ever. McGourdy and subs Odhran Eastwood and Paddy McBride all pointed as Antrim looked to get something out of the game. In reply Eoghan Ruth’s second point was vital for Carlow.
Carlow nerves jingled in the countdown to the final whistle but they finished on a high, working the ball down the field where the visitors won a free.
All Broderick had to do was to make sure the ball went dead. His effort skimmed the right-hand upright and deflected wide. It didn’t matter. The final whistle came on the kick-out.
Players, the management team and supporters who had made the long journey from a snow-covered Carlow to this Belfast venue gathered together as one. Memories are made of this.
Carlow: Robbie Molloy (Rathvilly); Chris Crowley (Palatine), Shane Redmond (Tinryland), Conor Lawlor (Palatine); Jordan Morrissey (0-1, Éire Óg), Daniel St Ledger (Kildavin-Clonegal), Ciaran Moran (Palatine); Brendan Murphy (Rathvilly), Sean Murphy (Fenagh); Sean Gannon (Éire Óg), Darragh Foley (1-2, 0-1 free, Kilbride), Eoghan Ruth (0-2, Éire Óg); Paul Broderick (0-7 frees, Tinryland), Darragh O’Brien (Éire Óg), John Murphy (Grange). Subs: Cian Lawlor (Tinryland) for O’Brien (48 mins), Mark Rennick (Palatine) for Gannon (62 mins), Benny Kavanagh (Éire Óg) for Morrissey (65 mins), Lee Walker (O’Hanrahan’s) for Foley (67 mins). Rest of panel: Craig Kearney (Palatine), Diarmuid Walshe (Tinryland), Danny Moran (Tinryland), Jamie Clarke (St Andrew’s), Liam Sheppard (Fighting Cocks), Conor Crowley (Palatine), Kieran Nolan (Fighting Cocks), Mark Furey (Éire Óg), Jack Kennedy (St Patrick’s), Liam Roberts (Kildavin-Clonegal), Shane Clarke (St Andrew’s), Simon Doyle (O’Hanrahan’s), Darren Lunney (Ballinabranna), Brian Cawley (O’Hanrahan’s), Barry John Molloy (Rathvilly)
Antrim: Chris Kerr; Peter Healy, Patrick Gallagher, Niall Delargy; Kevin O’Boyle, Mark Sweeney, James Laverty; Ricky Johnston, Paddy McAleer; Matthew Fitzpatrick (0-1), Conor Murray (0-1), Ruairi McCann; CJ McGourty (0-7, 6fs), Colum Duffin, Ryan Murray. Subs: Kristan Healy (0-1) for R. Murray (h/t), Stephen Beatty for O’Boyle (black card 48 mins), Odhran Eastwood (0-1) for Sweeney (black card 63 mins), Paddy McBride (0-1) for Laverty (66 mins).
Referee: Barry Judge (Sligo)