The clash was not one for the purists, as the champions accounted for Palatine by 0-9 to 0-5. In a game of fine margins, three second-half points by substitute Niall Quinlan proved crucial, as Palatine were held to just a single point for the entire second-half. 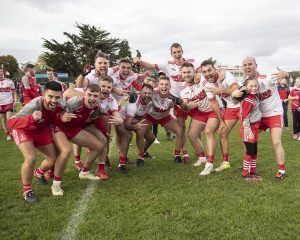 Éire Óg players celebrate their victory over Palatine in Sunday’s senior football championship final. The Carlow town club brought home The Nationalist Cup for the second year in a row thanks to a 0-9 to 0-5 win at Netwatch Cullen Park
Photo: Thomas Nolan Photography

In a packed weekend of action, Éire Óg also won the junior B title, while Ballinabranna enjoyed a double success of their own, winning the intermediate and junior C crowns.