FOR many native Carlovians, the county anthem Follow me up to Carlow is about the only song title they associate with their native place. Well, that has changed now, thanks to the launch of a dedicated website which features an archive of songs and recitations about Co Carlow or by Carlovians. Its address is www.fromcarlowstreams.ie and the site can also be accessed through Carlow Tourism’s online platform.

To date, approximately 210 items have been archived, tagged by local area, by author and by theme. Typical themes include love, pride in place, emigration, local characters and events, local heroes (patriotic and sporting), religion and fun. Where recordings exist, they are also included. 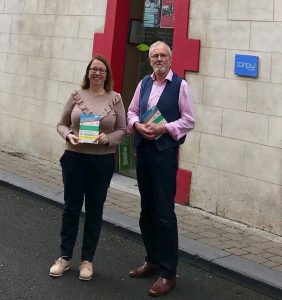 Eileen ORourke, CEO of Carlow Tourism, and Dave Barron with copies of From Carlow streams, whose website features songs and recitations about Co Carlow and Carlovians

The initiative has come from local men Dave Barron and Richard Breen. Dave imagined the original concept and did the research, while Richard has provided the technical expertise. Work on the compilation of the material for the website began last winter and continued through early spring. And now that it’s up and running, From Carlow Streams continues to grow.

There is a long and rich oral tradition of song and story in Carlow, but much of that material has been lost. The website aims to preserve the traditions that still exist in these areas of the county’s culture. The Rambling House, where songs, poems and recitations are passed from generation to generation, continues to feature in Co Carlow. It plays a strong part, sometimes unrecognised, in keeping our native culture alive, something that Dave argues is more important than ever nowadays with the growing influence of the cosmopolitan media.

To date, Dave has gathered material for the site from a disparate group of collectors around the county whose contributions are included in this cultural website. These include Danny Browne, Carlow Historical and Archaeological Society (CHAS), Tony Malone, Eddie McDonald, the late Luke Morrissey, the late Seamus Murphy, the late Willie White, John Candy, Dermot Mulligan, John Shortall, Seamus Dunne and Michael Rice. The list continues to grow.

Dave is now appealing for more material – songs, poems, recitations. He asks that anyone around the county or just beyond its borders who has old songs, poems or recitations would contact him. Old recordings are also very welcome. The promise is that all material will be treated carefully and returned promptly and undamaged and that it will be added to the site.

The project remains open to ideas on how best to use the website resource. Possible usage includes a heritage and local history project in local schools or it could be put to use by local musicians or actors. Whatever uses it may be put to, Carlow now has a website of its own, possibly the first in Ireland, where people from anywhere in the world can explore and simply enjoy the rich oral heritage of the county and its hinterland.

Any suggestions or new material would be welcomed by Dave on 087 2204488). He is also contactable at [email protected].

Carlow has fourth highest rate of Covid in Ireland