Carlow fight back but fail to advance

THE reigning Oscar Traynor champions fell to an early exit as they succumbed to a 3-2 loss against Leinster Senior League on Wednesday night.

Leinster Senior League raced into a 3-0 lead shortly after half-time, but Carlow pulled back two goals late on to set up a grandstand finale. However they could not find the crucial third goal to level the game and send them through to the knockout stages.

Leinster Senior League started best and found themselves 1-0 up after eight minutes when Ian Touhy cut in from the left past Michael Calvey, leaving Jamie Hennessey in goal with no chance. However, they might have found themselves in a bit of trouble when Gary Cleary fouled Carlow’s Ethan O’Neill, who was through on goal. The resulting free on the edge of the box came to nothing. They went 2-0 up two minutes later when Jordan Payne found himself one-on-one with Hennessey who came out to block but couldn’t get hold of it properly and Payne took the ball back off him, turned and shot into the empty net. 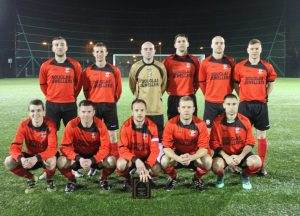 Carlow had a glorious chance to pull a goal back 20 minutes in when Craig Comerford’s cross from the left found O’Neill to the right of the goal; O’Neill shot, but could only find the post with Colin Osbourne waiting to hit the rebound straight at Cleary in the Leinster goal.

Ten minutes from half-time, Carlow should have scored when Roy Byrne’s cross from the left-hand side found Osbourne, who hit the post. The rebound fell back into the path of Byrne in the middle who had an open goal, but he somehow managed to steer it wide.

The second-half saw Leinster find their feet again and they almost scored when Chris Streselle found himself through on goal, only for a good tackle by Mark Furlong.

They scored their third six minutes in through an O’Neill own goal. A cross from the right-hand side saw O’Neill deflect the ball into his own net while trying to clear it.

Carlow pulled a goal back through sub Michael Mullen, who headed in at the back post with 20 minutes to go. They pulled back a second when sub Danny Doyle found himself through on goal,  but he was taken down in the box and he put away the resulting penalty.

Aaron Morris had a great chance to level things up at the end but he could only steer his shot at the goalkeeper.

It brings to an end a disappointing Oscar Traynor campaign for Carlow. After the joys of last season which brought final glory, they have failed to find a route out of the group stages. This will sting for players and management alike.