Visitors stay ahead with little at stake

THIS first round O’Byrne Cup game at Netwatch Cullen Park on Sunday game was a bit of a damp squib. All the focus is on the new rules but it is hard to see what benefit they are going to serve after this showing.

After that it was about the two groups of players playing for their counties. It is an honour and an achievement to do so, but nobody will be fooled into thinking what was on offer here will be anything close to national football league Division 3 intensity, let alone teak-tough championship outings.

Westmeath always looked the better equipped. Points from Killian Daly, Sean Petit and Joe Halligan moved them into an early lead. A Daniel St Ledger free got Carlow off the mark on nine minutes but shortly after that they lost All-Star nominee Paul Broderick when the Tinryland man turned awkwardly and required lengthy attention before leaving he field.

At the other end, a Petit free restored the three-point lead which went out to four when Paddy Fagan scored from play.

points from Diarmuid Walshe and Darren Lunney narrowed the gap to two but Westmeath held the edge in the second quarter. Carlow’s total of five first -half wides didn’t help their confidence either while in contrast, Westmeath didn’t even register one in the opening half. In the second half they did err on four occasions which suggests the wind blowing from the Killeshin end might have been a factor for the players. 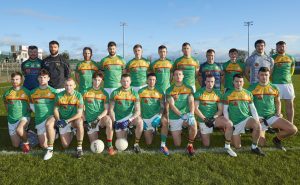 The Carlow team who played Westmeath in the O’Byrne Cup at Netwatch Cullen Park on Sunday Photo: michaelorourkephotography.ie

When Sean Flanagan took possession far from the Carlow goal for the visitors, there didn’t seem to be a lot on. However, a slumbering Carlow defence saw the ball carrier offload to Fagan who in turn picked out Petit. The move had goal written all over it but Robbie Molloy was fast and brave as he moved quickly from his line to make a brave save.

At one point the combined probing of Petit and Halligan saw Westmeath lead by six points but that was reduced to 0-9 to 0-5 at the interval with a free from Darragh Foley and an effort from Darren Lunney.

Early in the second half, Westmeath were reduced to 14 players when Petit picked up a black card and was sent to the stand for 10 minutes. The extra man should have offered some sort of advantage to the home side. It didn’t show even though Walshe and Lee Walker added to the Carlow total. In reply Luke Loughlin converted two frees.

Even though Darragh Foley worked hard to put in Simon Doyle for a point, there was a sense of inevitability about the result. Goal chances were scarce. Carlow had one earlier on when Conor Crowley took an offensive mark but instead of taking his point he passed to Darren Lunney. Again a bit like Robbie Molloy in the first half it was keeper, Kevin Fagan, who made the save to deny Carlow who might have built up momentum if they had raised a green flag.

With the clock approaching 70 minutes, Westmeath full-back Ronan Wallace did well to intercept an attempted Simon Doyle pass to a Carlow player who had drifted past the last line of defence. It wasn’t a cast-iron goal chance but it had potential.

It didn’t  happen for Carlow on the first day of a new senior intercounty football season in early December.