THE Carlow Farmers Hunt point to point which took place at Borris House proved to be an outstanding success last Sunday week.

Run under Turf Club rules there were over 166 horse entries for contests over fences which, because of the large entry, meant racing which had been due to start at midday was brought forward to 11am.

A little bit of history was created when jockey Barry O’Neill from Kiltealy achieved a career milestone by riding his 500th winner during the meeting. 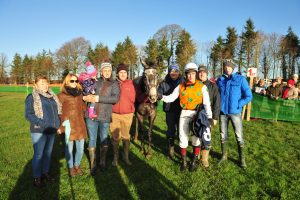 Winner of the first race at the Carlow Farmers Point to Point in Borris House was Outonpatrol pictured with connections Photos: Roger Jones

Committee member Liz Doran was delighted with the day.

“The judges had a tough task. There were a lot of very well dressed ladies and gentlemen on the day,” said Liz.

“At lot of work went into it by the Carlow Farmers Hunt point to point committee,” she added.

Santa’s grotto and a Christmas market meant the event attracted more than just racing enthusiasts. The organisers hoped people from the surrounding areas would support the event and that is exactly what happened.

“We were delighted with it. Usually it is only connections with horses, but with the best dressed and Santa we got a lot of locals. We tried to advertise it as a family day and I think we were successful by doing it,” said Liz.