Home draws for Tullow and Co Carlow in Towns Cup

THE Bank of Ireland Provincial Towns Cup draw which took place at Lansdowne on Saturday was kind to Tullow (beaten finalists last season) and County Carlow FC with the clubs drawn at home to Mullingar and Kilkenny respectively. Matches will be played on the weekend of Sunday 20 January.

Leinster players Sean O’Brien, Bryan Byrne and Peter Dooley drew the names out of the drum on what is always a marquee day for junior clubs in the province.

On Sunday Tullow manager Maurice Logue looked forward to a busy and important January which could make or break their season.

“A home draw is a good draw in a cup,” he agreed, but he said the focus will initially be on the league. 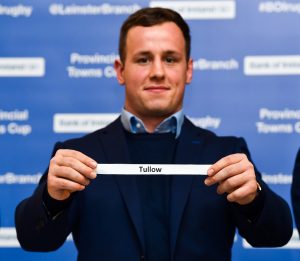 Bryan Byrne pulls Tullow out of the drum

“We have a big month ahead of us with Carlow and Longford in the league, Monkstown away and then the Towns Cup so there are four very big weeks in that.”

Poor results early in the season threatened to take them out of the quest for promotion to Division 1A but recently they have pushed themselves back into the picture.

Logue knows Suttonians are in command of Division 1B, five points ahead at the top of the table. There are only three points between Longford, Monkstown and Tullow so every game is a must-win for the sides in contention for second place.

“We had a lot of injuries at the beginning of the season after only winning one out of four league games, but we have gone four games unbeaten now,” observed Logue.

“We are on a good run and we have the Carlow game which is a local derby. Carlow are going well themselves too so it will be a tough game in Tullow.”

About Mullingar Logue knows only what he can glean from the Division 2A league table.