By her side were family members, friends and supporters who have followed and enjoyed her sporting achievements over the last number of years.

PL Curran of St Laurence O’Toole AC, Pat Ryan, Director of Coaching and Development at Athletics Ireland and Liam Lyons of Carlow Community Games all spoke and paid tribute to Molly and her accomplishment in winning a coveted world medal as part of the Irish 4x100m relay team. 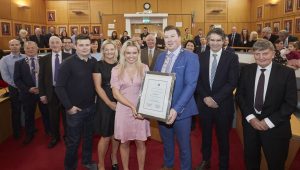 “It was great. I was honoured and so many people turned up. It was great to be recognised,” Molly told The Nationalist.

“Brian did a really nice job. You know Brian, he can be really funny and had some really nice things to say,” Molly said.

The athlete herself also spoke and was not fazed by the large number of people who turned out in support.

“It was fine. I am getting used to it now and it went OK. There was a nice mix of people who helped and encouraged me,” she said.

While her 2018 achievements still linger, Scott is now setting her sights on further challenges in 2019.

“I am training hard. I still look back on it (the world championships)  as a great memory but I’m looking forward to 2019 and hopefully I can win a few more medals.”