The event was held recently in Dublin’s Gibson Hotel.

On receiving the award, Henry and Jason Hegarty paid tribute to their hard-working team as well as the support of business coach Rory Smyth.

The company has been in business since 1968, where Gordon Hegarty and his wife Ellen established the farm machinery enterprise. Sons Henry and Gordon joined the firm in 1975, when it moved to a larger premises at Slaney Quarter. Daughters Carmel and Mary Jo have worked in the dealership since the early days and are now back as part of the expanded team. 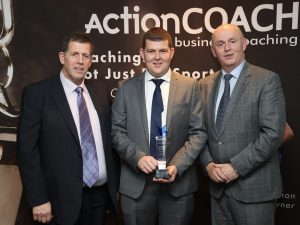 Henry and Jason Hegarty of Gordon Hegarty and Sons with their business coach Rory Smyth after winning Best Service Business at the ActionCOACH Business Excellence Awards in The Gibson Hotel, Dublin

In 2010, Gordon Hegarty & Sons opened a second branch at Blanchfields Park, Clifden, Co Kilkenny. Three generations of the Hegarty family are now involved in the new venture ‒ Gordon’s grandson Jason coming on board in 2007 ‒ which brings a tradition of providing an unrivalled service and parts back-up to Kilkenny farmers and contractors.

Growth and success was very much the running theme at this year’s awards, which included representatives from the retail, property, manufacturing, service, hospitality and tourism sectors.

ActionCOACH Ireland MD Paul Fagan described Gordon Hegarty & Sons’ win as “a fantastic achievement, especially given the phenomenal performance of all of our clients here today”.