CARLOW Gymnastics Club had great success at the national acrobatic team trophy in the national sports centre, Abbotstown. This Gymnastics Ireland-organised competition had clubs from the four corners of the country competing.

The local club had teams at each level. The grade one team won bronze. This was the first national competition for these and it proved to be a very positive experience for them. The team consisted of three pairs: Anna Mulhall and Mia Branagan, Rachel O’Grady and Ali O’Donohoe, Sophie Byrne and Millie Nolan.

The grade 3 team won the team silver medals thanks to some great performances. The team was Fiach O’Toole and Fionnan O’Shaughnessy, Rhianna Leyden and Isabelle Coffey, Shauna Gavin and Hannah Goss.

Team gold went to the Carlow’s 11 to 16 team. Each trio produced magnificent performances. The trio of Isabelle Ryan, Paulina Zych and Delphine Byrne performed a routine that had the highest score for the entire two-day competition to win the overall FIG (Federation of International Gymnastics) award for the highest execution score. This is a great achievement for the girls. 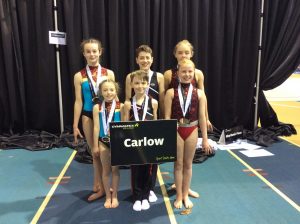 The grade 3 team who were silver medal winners

This group along with the trio of Seoighe English, Shonagh Travers and Aine Doyle and the trio of Louisa Mc Govern, Abbie McDermot and Beibhin Nolan made up this 11 to 16 team, national team champions.

A second overall award also went to a Carlow group. This was the award for the Best Artistry of the FIG competition for choreography and performance.

The Carlow trio who took the title was the 12 to 18 group of Eilis O’Neill, Rebecca Shannon and Ella Sullivan.

Also representing the Carlow club at this competition were the grade 2 team of Ella Molloy and Hannah Beth Lawlor, Noah Ogelsby and Fintan Nolan, Jemina Bunbury and Kiera Gibbs.