THE boys and girls at Gaelscoil Cheatharlach got to wear their festive geansaí to school and raised some much-needed funds for Cystic Fibrosis Ireland.

The school decided to raise money for the charity because two of its pupils, Ross Ó Feraghaille in fifth class and six-year-old Ava Ní Aide in senior infants, have the condition. With both children being vulnerable to picking up infections, it’s important that they are kept separate from each other as they go about their school day. 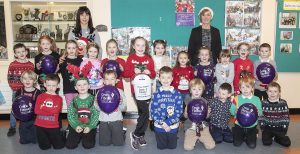 “The Gaelscoil has been fantastic to our children! They’ve done everything they can to ensure that they have a normal school day and to protect them and keep them safe,” said Elayne Farrell, Ross’s mother. Eleven-year-old Ross’s dad is Ian Farrell and the family live in Ballon, while Ava hails from Carlow town and is the daughter of Michelle Thorpe and Paul Hade.

To raise funds for Cystic Fibrosis Ireland, the youngsters were invited to wear their festive jumpers and donate a few bob to the organisation. The school has previously hosted a cake sale, while the teachers also raise awareness about the condition throughout the year.