A CENTURY of memories and experiences were celebrated when well-known retired school teacher Paddy Gilman celebrated his 100th birthday in December.

Paddy, now a resident at SignaCare Nursing Home in Killerig, had a party to celebrate the landmark birthday, which was attended by members of his family as well as several past pupils. The contingent of Paddy’s former students from Knockbeg College included Fr John Dunphy, Fr John McEvoy and Mgr Brendan Byrne as well as current principal Mike Carew. 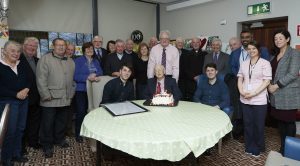 “Congratulations to Paddy on his great achievement. He’s fondly remembered and appreciated by the community of Knockbeg for his contribution to the school and school life over the years,” said Mr Carew.

Paddy is a member of a choir that’s comprised of the nursing home residents and some local children from Grange National School. At his party, Paddy was delighted when the youngsters called in to sing him a special Happy birthday, while he was also presented with a copy of the front page of the Irish Independent from his birth date of 20 December 1918.

His son Dick attended the party, while his daughter Marie had been home on a visit from America the week before.

Sadly, Paddy lost the love of his life, his wife Maura, last year after the pair raised their three children ‒ Dick, Marie and Michael ‒ in Ballickmoyler. Marie, who passed away in September, was also a well-known teacher, as she taught home economics in Presentation College, Carlow for decades, too.

Paddy told staff at the nursing home that he was grateful to everyone who made his milestone birthday extra special.