GRAIGUECULLEN teen Lauren Morrissey bravely faced the scissors recently to transform her long, luscious locks into a sleek new bob in aid of a worthy cause very close to her heart. The 17-year-old from Spindlewood decided to donate her long blonde hair to the Rapunzel Foundation, a charity which donates hair to children suffering from hair loss due to illness.

Not content with just one good deed, Lauren, a student at St Leo’s College, Carlow, also took the opportunity to turn her dramatic haircut into a fundraiser for CMRF Crumlin.

“She has been growing her hair for the last ten years,” explained her mum Joanne. “She had it trimmed all the time, but it’s been very long for about ten years,” she adds.

Lauren sadly lost her first cousin Heather Cowan (12) to leukaemia last July and since the family’s heartbreaking loss Lauren has been keen to do something to support children like Heather, who are battling illness, while also helping the ongoing drive for cancer research. 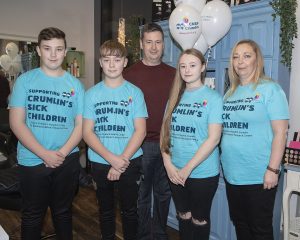 “Lauren wanted to do something; she kept asking about it. Heather herself had received a donation from the Rapunzel Foundation when she was going through her treatment and it gave her a huge boost at the time,” recalls Joanne.

An excited Lauren faced the snip at Berlin Hair Studio, Carlow on Christmas week, joined by her parents Joanne and Lar Morrissey, brothers, grandparents and extended family, including her aunt, Heather’s mum Mary Cowan (née Morrissey). “We took over the place,” smiled Joanne.

CMRF Crumlin sponsored the event, providing t-shirts and balloons, which added to the atmosphere.

“Lauren was a little nervous, but the girls in Berlin were excellent. They did a great job on her hair,” she adds.

A whopping 18 inches was cut from Lauren’s beautiful hair and already it’s been donated to the charity.

“It’s a huge change, but the girls in Berlin did a lovely job on it and she loves it,” said Joanne.

Sponsorship cards and donations are still flooding in from Lauren’s charity haircut.