AMY Barrett, a 17-year-old schoolgirl, has just released her second single, Heartbreak, after her first recording reached the far-flung corners of the world.

“It’s incredible how songs can reach a global audience these days. I released my first single Emilio back in April and I didn’t know what to expect. Thankfully, the reaction was very positive and it went as high as number two in the Irish iTunes singer/songwriter charts,” Amy told The Nationalist. “I was really happy with how that went, so I thought I’d put out another song.”

Amy said that she’s “been singing since before she could walk” and draws on her experience as a teenager as inspiration for her songs. 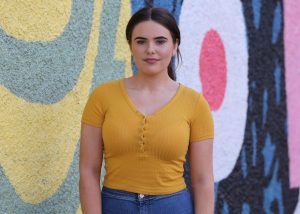 Heartbreak is inspired by all the teenage drama many girls go through. You see it all the time, from social media to TV. I played it at a recent gig and it went down very well,” she continued.

Although Amy is only 17, she’s already experienced in the world of music and entertainment, having appeared on Ireland AM on TV3 and on 2FM’s Eoghan McDermott Show. Hailing from Dunlavin, her parents are Dave, a well-known photographer, and Antoinette, who teaches in Piper’s Hill, Naas.

She’s still in school at St Mary’s College, Naas and is studying for the upcoming leaving cert exams. And even though she’s focused on the exams, she’ll still find time to write and perform new material.

“No matter what happens, I’ll never stop playing music. I love it!” she said.

Heartbreak was released on Friday on iTunes, Spotify and other digital stores and is available at amyb.ie.