Bob’s a banker when it comes to raising funds!

AROUND 60 people plunged into the sea at a west Cork village on New Year’s Day, including retired bank manager Bob Jeffers, to raise funds for the local lifeboat crew.

Bob, who recently retired from AIB in Tullow, was among the hardy souls who took to the sea in Courtmacsherry. This was the 27th time that he took part in the charity event, having been a member of the local RNLI crew in the 1970s. His family were originally from the seaside village and have kept their connections with Courtmacsherry since he moved to Co Carlow in 1990. 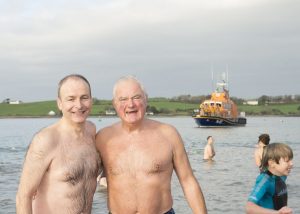 He added that even though Courtmacsherry is more than 200 kilometres from his adopted county, the people of Carlow were very generous and supportive of the sponsored dips into the sea.

Among the many swimmers this year was Fianna Fáil leader Micheál Martin, whose family own a summer house down there.

This year, the weather was exceptionally mild, compared to other years.