FENAGH had a wonderful new addition this Christmas with the erection of a fantastic nativity scene. The Fenagh Improvement Group (FIG) commissioned the beautiful display in the village for the festive season. It’s made of steel and can be assembled in a short space of time.
The idea was formed at a committee meeting in November, when Kathleen Cox suggested a nativity scene in the village instead of street lighting. The group’s secretary Cathy Craddock heard about one in Cuffesgrange, Co Kilkenny and said that it was lovely to see while driving through the village. 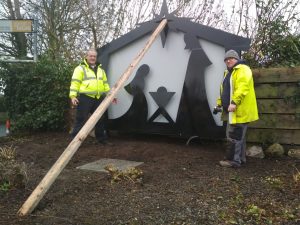 A steel silhouette scene of the nativity was selected. Pro Dig engineering in Newtown agreed to cut it on their plasma cutting machine. Design engineer Matt Reilly was ably assisted by Philip Rothwell from Ballywilliamroe to programme the design.
John Byrne of Waterproof Covers, Augha made a white tarpaulin cover to fit around the back of the scene. Tom Cox did the welding and painting, while Matt Cummins and Seán Mahon looked after the lighting and controls.
Seamus Ryan from Tús and Michael Dermody from the Mount Leinster region community scheme prepared the site, dug the holes and fixed the support poles for the main frame.
It was all erected on Friday 14 December and the lights were officially switched on at 4.30pm on the following day by two-year-old Ruadhan Butler with assistance from his brothers Conall and Tadhg from Kilmaglin.
FIG chairperson Tylea Gifford thanked all who helped, particularly Tom, Matt and Seán as well as sponsors Pro Dig, Deb Con, MJ Lomax and cllr Tommy Kinsella for his generous donation towards the project.