THE Carlow and District Racing Pigeon Club celebrated its annual awards night and a great year at Carpenter’s bar recently.

Founded in 1965, the clubhouse is still located at Lower Pollerton Road and the club currently has 27 members.
Carlow and District, Barrowvalley, Naas and Newbridge pigeon racing clubs have formed a federation and race every week. Typically, 1,000 birds are raced every week.
Tom Moore is one of the club’s founding members and is still actively involved. He won an old bird race this year from Macroom (107 miles), beating 947 other birds.
PJ Nangle is another long-standing member and did the club proud this year by winning the Old Bird National from Skibereen (133 miles) competing against 3,577 pigeons from every county in Ireland, north and south. 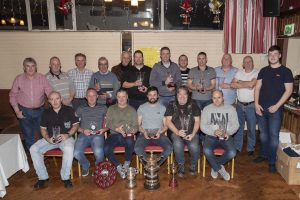 All of the club members would like to thank committee members PJ Nangle and Colin Nolan for their hard work and dedication, which is much appreciated. Special thanks also goes to John Dowling for his sterling efforts in keeping the clubhouse running every week.
For enquiries about the club or information on becoming a member, please contact club secretary Colin Nolan on 085 1020828.