CARLOW town duo Darragh O’Connor and Jack O’Flaherty, known as Exiles, have been receiving nationwide media attention since the release of their latest single Rearview mirror.

With Jack as front man and Darragh on keyboards, Rearview mirror is a perfect slice of 1980s-inspired pop that’s gaining plenty of attention across radio and social media. The song was released last Friday and launched on Saturday at the band’s gig in Scraggs Alley on Carlow’s Tullow Street. It has already been named on Beat 102FM’s artist of the week slot and featured on RTÉ 2FM’s ‘Play Irish’ initiative, as well as receiving widespread airplay around the country.

The gig was staged by Youngblood Music and Carlow Creative Collective, Darragh being a founder of both. The aim of the organisations is to connect and promote local creatives such as artists, photographers, illustrators and, of course, musicians. 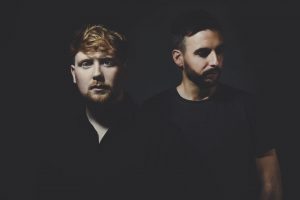 “For a number of reasons, a lot of creative people in Carlow have had to operate outside of the county,” says Darragh explains. “Carlow Creative Collective is working with local people in the community to try and build a scene where creatives are aware that there is a depth of talent, and young talent, in the area and offer them a platform to exist, collaborate and promote themselves within their own community.”

“Youngblood is based on a lot of the same principles as Carlow Creative Collective but focused exclusively on music,” he continues. “I get a lot of questions from people looking for advice on how to break into the music industry. It’s usually the basics like how to get your music onto Spotify, who to contact for gigs, recording a demo and so forth. I’ve been figuring out all that stuff over the last few years with Exiles, so it puts me in a good position to help younger musicians who might not know where to start.”

Wallace tells employees to ‘walk out’ if working conditions are unsafe