Rachael’s book will break down barriers for children with autism

A FIFTH-YEAR student looks set to be a publishing phenomenon after a book she wrote for a class project was snapped up by a leading charity for people with autism.

As a young person with autism herself and using her own experience of structured learning to actively navigate social situations, Rachael wrote and illustrated a book entitled Being a true friend, which is direct, informative, creative and fun. While this self-help-style book was created for readers with an autism spectrum disorder (ASD), its appeal stretches to readers of any age who may experience challenges in the playground or classroom environment. The book is aimed at children developing interpersonal skills and offers pointers in developing good friendships by identifying ‘fake’ friends from ‘true’ friends. 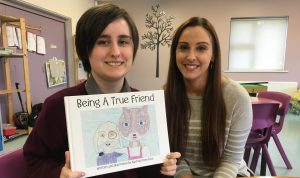 “I wanted to write a self-help book and after discussing some ideas with my teacher, I came up with the idea of a book that will help others know if someone is a good friend to you or not through the way they treat you,” Rachael told The Nationalist.

Rachael’s English teacher Erika Hanton, who’s also the school’s autism unit co-ordinator, knew straight away that Rachael’s creation was special. Rachael, who hails from Fenagh and who is the daughter of Stephanie and Paul, drew inspiration from her love of cats and Japanese animation to illustrate her book.

“Rachael has worked incredibly hard on this piece in school for a number of months now. Her illustrations are simply beautiful: raw, honest sketches, drawn with acute precision. Each character portrays such conviction in their detailed expressions,” said Erika.

Adam Harris, autism ambassador and founder of the autism support group Asiam.ie, met Rachael last week and will now get the book published. Erika will approach special needs educational companies to stock the book, which she believes will benefit children of all ages and demeanours.

Rachael herself understands the importance of explicitly learning social skills and dedicates much of her personal social success to the skills she has formally learned in An Grianán autism unit in her school. The unit was one of the first such facilities established in a post-primary school in the country and has 12 students from a large geographical area. Australian native Erika studied and trained specifically in ASD education in her home country before moving to Co Carlow. She is one of eight teachers who work in the school’s An Grianán autism unit.

“It’s incredible to think that this came from an English project. I’m so proud of Rachael, we’re all proud of her here,” concluded Erika.