THREE candidates have this week been selected to run on the Fine Gael ticket in the Carlow area in the upcoming local elections.

Sitting councillor Fergal Browne is joined by former councillors Tom O’Neill and Wayne Fennell to contest the May election in the seven-seater Carlow Municipal District. The Fine Gael party in Carlow held its selection convention in the Seven Oaks Hotel last Thursday night, where a large crowd endorsed the three candidates and looked forward to a strong showing for the party on Friday 24 May. 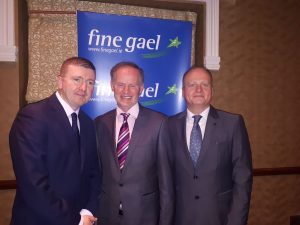 While Co Carlow has retained its 18 councillors for the 2019 local elections, a recent boundary review has resulted in the division of the county into three electoral areas.

Cllr Browne has previously served two terms on Carlow County Council and is a former member of both Carlow Town Council and Seanad Éireann.

Tom O’Neill and Wayne Fennell have previously served on Carlow Town Council and Carlow County Council, representing Carlow locally, nationally and internationally over many years. Both were unsuccessful in the last local elections in 2014 but have remained active within the party and the Carlow community.

“Both Tom and Wayne remained involved and have shown a great willingness to stand again, which I think really shows their commitment and interest,” said cllr Browne.

“I would be hopeful that we can win at least two seats in May,” he added.