A CARLOW band hopes to grow its rootsy sound in new directions with its latest single The Jerry this weekend.

Beef Supreme will launch the new single on Saturday night, 9 March, in Tully’s Bar, Tullow Street, Carlow at 10pm, with all welcome to come along to this free gig.

Beef Supreme is a popular rock band, with all six members hailing from Carlow and they have been performing their original music for almost a decade now.

The band consists of Jimmy and Shane O’Rourke, Gavin and Shane Glover, Micheál Bolton and Darragh O’Connor and they have released EPs in 2014 and 2015 and an album in 2010. 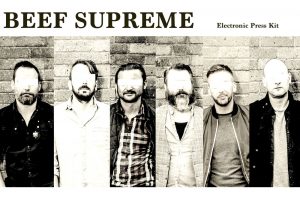 This time around, Beef Supreme tested their metal by decamping to Orphan Recording Studios in the Dublin Mountains where, under the watchful eye of Gavin Glass, they laid down some of their most intentsely-driven music to date. The result is The Jerry, which catches Beef Supreme’s distinctive sound and intense lyrics.

“I wrote the lyrics and then the music we work on together,” explains Jimmy. “We decided to up the ante this time by working with Gavin Glass, who is very well known in this genre of music,” adds Jimmy.

“Beef Supreme was one of the characters in Idiocracy, so we took the name from that,” said Jimmy.

To find out more about Beef Supreme or their upcoming gigs, check out www.therealbeefsupreme.com.