US presidential hopeful has roots in Milford

WE could have a Scallion Eater in the White House, as one of the leading Democrat politicians likely to face Donald Trump in the next US presidential election has Carlow roots. Texas politician Beto O’Rourke may have been dubbed ‘the new Barack Obama’, but lesser known are his roots in Milford.

The Nationalist can reveal that his maternal great-great-great-grandmother was one Mary Ann McGrath, who was born in Milford in 1837. The daughter of Michael McGrath and Margaret Doyle, she was christened in Tinryland parish. She emigrated aged 12, arriving in the port of New York in January 1850, according to records. She married Meath man Edward Fyans and had one daughter, Elizabeth. Mary Ann died aged 81 and is buried in Milwaukee. 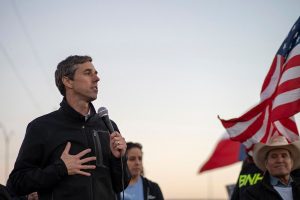 The US politician, who recently launched his campaign for the Democrat nomination to contest the 2020 presidential election, also has Irish connections on his paternal side with family hailing from Leitrim.

Beto O’Rourke first made waves in 2018 when he was narrowly defeated in a senate seat race by Republican Ted Cruz in the red state of Texas. His charismatic personality, optimistic viewpoint and the national profile have drawn parallels to a young Barack Obama.

It makes you wonder whether we could see the US president’s car, known as The Beast, on the Kilkenny Road out from Carlow town on the way to his home place in the years to come. Who knows, we might even get a Beto O’Rourke Plaza off the M9 out of this!