Captain O’Brien to lead out Leinster against Glasgow

Sean O’Brien will captain the Leinster team when they take on Glasgow Warriors in Saturday’s Guinness PRO14 clash at the RDS (3pm).

The Tullow Tank will start alongside the relatively inexperienced Josh Murphy and Caelan Doris in the back row. 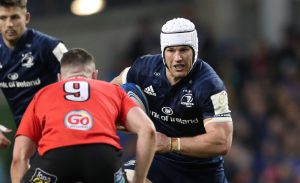 In the back three, Rob Kearney is joined by Jordan Larmour and Dave Kearney, with the returning Robbie Henshaw paired with Joe Tomane in the centre. Jamison Gibson-Park and Ross Byrne are the half backs.

Carlow’s Ed Byrne starts in the front row alongside James Tracy and Michael Bent with Devin Toner back from injury to take his place in the second row alongside Academy forward Jack Dunne. It will be a first Leinster start for 20-year-old Dunne.

On the bench there is the potential for a seasonal debut for Will Connors. Should he come on he will become the 56th player used by head coach Leo Cullen this season.