THE proceeds from this year’s Charlie Curran Memorial Run were handed over to two worthy causes recently.

Members of both groups also volunteered at the event, which saw 700 runners take part in the five-mile event. 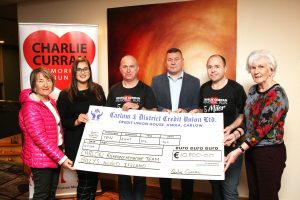 Organisers Charlie Curran Jnr said: “It exceeded our expectations and we were delighted the event went so well.”

Proceeds from next year’s run will go to the Irish Guide Dogs and Brain Tumour Ireland.

To date, the event has raised more than €32,000 for a host of good causes in just five years.

It will continue as a five-mile run and it’s hoped to temporarily close the route to traffic for the duration next year’s edition.

Charlie Jnr expressed his thanks to the sponsors and those who supported the event, including Carlow Lions Club, the Fighting Cocks GAA Club and the Order of Malta.

“I cannot say thank you enough to them. It cannot happen without their support,” he added.